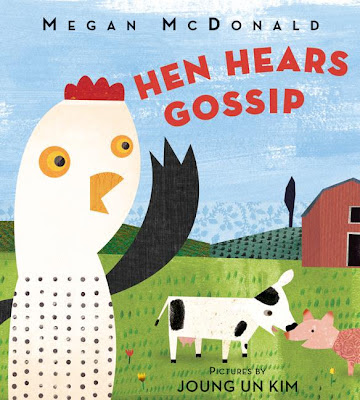 I always understood a gossiping hen to hold negative connotations, not just about gossip but about a type of woman who get together with like and hold hen parties. Am I wrong, is this not considered a negative stereotype?

And I cannot be the only person with that song from The Music Man running through his head.

There. Now it's in your head too.

We start with hen, who overhears cow say something to pig. Gossip! She loves Gossip! And so she spreads the word.

From here the book turns into a game of telephone, where the message changes as each of the barnyard animals spreads the word. The messages are, of course, absurd, and as the animals track the original message back to the source it turns out that cow was telling pig that her baby calf was born.

I'm just "okay" with this book. I think if it had begun and been titled with another animal I wouldn't have that negative connotation rolling around inside my head, and then it would be a somewhat amusing story about some misheard information. I suppose one could extract the lesson that gossip is bad but in order for that to be the case here there would need to be some sort of consequence for the gossip. That's the missing component, the one that would give the story some depth.

I guess I expect too much story from what is, at heart, just a misheard rumor.
Posted by david elzey at 5:35 AM