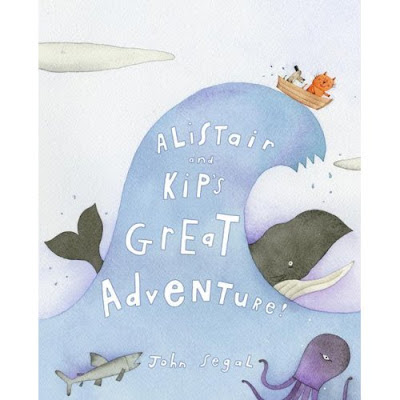 "Let's build a boat and travel to distant lands," says Alistair. And so they do.

Alistair cat and Kip the dog build themselves a boat and sail down river, into the bay, onto the open seas. A storm comes up, the waves crash their boat into a whale who saves them and takes them home.

The journey is a time-honored device in literature, all literature, but usually there is something transformative in the process. The dangers and desires of a journey have to have a purpose, otherwise what's the point? The Bard of Manchester once provided one of the most succinct examples of the power of journey

I was looking for a job, and then I found a job,
And heaven knows I'm miserable now.

See, the main character sets out to do something, and then he accomplishes what he set out to do, and his life has been transformed as a result. No such enlightenment here for Alistair and Kip as they merely come home determined to do the next day what they did the day before. Might as well have a story about a turtle and a donkey who go to the grocery store, eat what they bought, then plan to go to the store the next day.

Let me look at this story again, maybe I'm missing something. Do they have a magical adventure, something beyond the pale? No, they do not. You might be tempted to believe that their interaction with the whale is something, but in order for that to be the case you would have to marvel at a cat and dog's ability to build a boat and sail the ocean. But when dealing with anthropomorphic animals that stand in for humans we aren't supposed to be surprised at their abilities any more than we would stare at stranger in public adjusting their socks. Talking animals would expect nothing less from another -- the whale in this case -- than sympathy and understanding, unless it had been established in advance that whales were something to fear on their grand journey.

Do they glean anything from their experience? That whales are nice, perhaps, but is that the sum of their adventure? No, I don't find a great adventure here. Some nice watercolor work, totally ruined by variable type sizes throughout. That's about it.

I guess my problem is that I'm seeing a lot of books this season that all seem as limp as this, a story that could have been concocted by a small child. Wait, I take that back, I've heard small children tell much more involved stories. These would be the same children a simple book like this would be aimed at. So if kids are capable of longer stories why are the shelves filled with so many empty calories?

Great review! That Smith's lyric is one of my favorites.

Hey found you via LibraryThing. Your blog looks great and I look forward to reading more of your posts :) I also added you to my LibraryThing Bloggers page, stop by if you want, and make sure your link and name are correct.