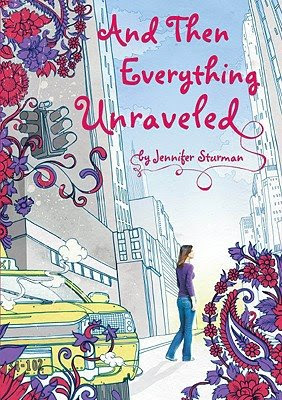 And Then Everything Unraveled
by Jennifer Sturman
Point / Scholastic 2009

This is going to be a totally unfair review. It is based entirely on the premise that, as a reader, I have the right to abandon a book that doesn't interest me and not feel guilty. It's also based on instinct, the same instinct that allows employers to know within ten seconds whether or not they will hire and individual for a job. It's about experience and preference and, fair or not, no less valid.

And I'm going to take as long to discuss this book as I did reading it.

Delia Truesdale can't believe it's only been a few weeks since the story she is about to recount took place. Her mother has "left for Antarctica with one of her environmental groups," leaving Delia with her semi secret surfing in the care of the housekeeper in her Silicon Valley home. Delia's friends, what few she has, are all tech geeks who are already wheeler-dealers and inventors. Dad is not in the picture, victim of freak accident. The car of the person who runs her mother's business affairs is in the driveway when she gets home. Bad news: Mom's ship has disappeared, no word on survivors. Mom must be... but no, Delia refuses to believe her mother is dead.

And we aren't even at page five.

I don't need anymore. The rule of a book that starts off like this is that any teen who refuses to believe their parent is dead is right. The rest of the book will concern the main character on a journey of discovery that will prove them right. Not having friends means she'll make some along the way (including a romantic interest) and will solve the mystery on her own. Naturally there will be obstacles along the way, including those close to her she is supposed to trust. Happy ending all around, and nothing will ever be the same again.

As proof, I jump from the first five pages to the last chapter, in this case the last three pages. Mystery is wrapping up. Kisses, and the promise of many more, from a boy named Quinn. Almost obligatory Shakespeare reference to Romeo and Juliet. Mother is safe in Chile. Trio of bad guys mentioned, indicating conspiracy, including aforementioned person who helped run her mother's company. And the story ends at the point where Delia can finally take a breath and recap it for the reader.

I don't care about this character before her mother disappears, I don't know the mother enough to care about her disappearance, and so I don't care enough to read everything between those opening pages and the last paragraph. I don't necessarily believe you need to go deep with character development before you can launch an adventure story, or a mystery, but you must engage the reader, you must give them something they can latch onto, something they can care about that will make them want to know what is going on in those 238 other pages in between. Unless, of course, you're writing formula for teens accustomed to artificial television drams with the attention span of a noodle.

Personally, I think teens deserve more respect from their reading material than that.

Did I get it right? In hunting down a cover image I landed on Scholastic's page for the book and missed only one element:

But Delia's still sent to New York to live with her two aunts - a downtown bohemian and an uptown ice queen.

And in case that's not bad enough, she also has to deal with a snooty new school and trying not to fall for the wrong guy.

Okay, I should have seen that: fish out of water, something to compare against a cardboard cutout of Silicon Valley. Other then that, I could have written the blurb for this book without having read it.

Sad, really. The book comes out in July.
Posted by david elzey at 12:19 PM

You know I have this one sitting here and when I read the cover copy I was concerned - the whole "downtown bohemian and an uptown ice queen" sent off all kinds of warning bells. (Because you can't just have two middle class aunts who are...normal.)

Best anti-review ever, David. Thanks for sparing me the pain of the first five pages.

1. This reminds me of when I started reading James Patterson's book, Daniel X, and by the end of Chapter 1 found I was just furious at how commercial and inauthentic the book was. Needless to say, I didn't finish it.
2. We just had a discussion in Kidlitosphere about whether you're wasting your time to write a negative review... This review was refreshingly informative and clear, and should have been Exhibit A for our conversation!

Ah, yes, the question of the negative review. I know I've participated in this argument in the past, and I'm a little surprised when it resurfaces.

Glad you found my review helpful. I know it might not seem so, but I wrestle with every negative review I post. Some have suggested that it generates bad karma – especially given that I hope to be published myself one day – but generally I feel that the review has to add something to the discussion of kidlit.

Also misunderstood: the idea that the reviews are personal attacks on writers. I know plenty of writers, and they are really nice people, but I do not always feel as warmly about what they write or how they write it. It is merely an opinion, my opinion, that I hope to convey, with a unique and perhaps different perspective.

And, seriously, we don't do the community any service by pulling our punches or remaining polite. In fact, I think we rather weaken any authority we may claim if we cannot call things as we see them.

I, on the other hand, really liked it!