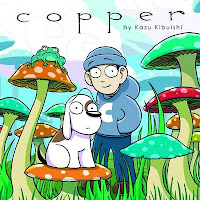 
A collection of occasionally-connected comic strips about a boy and his dog and a very strange, strangely reminiscent world...

As a boy named Copper walks home with his dog he imagines his backpack is a jetpack that takes him zooming around the skies.  Instantly he's surrounded by other jetpack fliers... who all are dropping bombs on a city below.  The fantasy ruined the boy returned to reality and sadly walks away. This is the first adventure and typical of many of the early single-page comic strips in this collection. At first the adventures all end with Copper coming back to reality from a dream, often with clues that influenced his dreams surrounding his room.  Soon, recurring characters and situations surface.  Who is the girl trapped in a bubble in his dreams, and does she have any connection with the girl in reality who keeps lobbing drawings and mash notes at him from afar?  Soon the waking aspect of the stories disappear – is it all a dream, or an alternate universe?  Are they trapped on an island?  Where can I find a melon bread stand with doughy goodness made with love?

It has to be said: the earlier strips in this collection borrow very strongly from Windsor McKay's Little Nemo in Slumberland comic strip from a hundred yeas ago.  Not bad source material to borrow from, but I was worried in the beginning that the stories would be fancy and fantasy and derivative.  And there are other cartoon references as well, including an early tip to Charles Schulz and Charlie Brown's love of a little read-haired girl.  Or the fact that it's a boy and his – is it a beagle? –who waxes philosophically and may not be as intrepid a traveler as he seems.

After a while the one-page stories grow to several pages, some stories connect in a semi-linear fashion, all of it takes on a certain veneer of other-ness.  Kibuishi may be familiar to those who have are following his Amulet series, or the Flight collections he edits annually.  The style here is featherweight compared to his other work, and the worst on could say is that it's a nice collection.  Of comic strips, mind you, not a graphic novel; there's no through-line or coherent cohesive structure here that grants it novel status.  Perhaps down the road Kibuishi will take Copper out for a lengthier adventure and perhaps answer some of the many question left unanswered here. 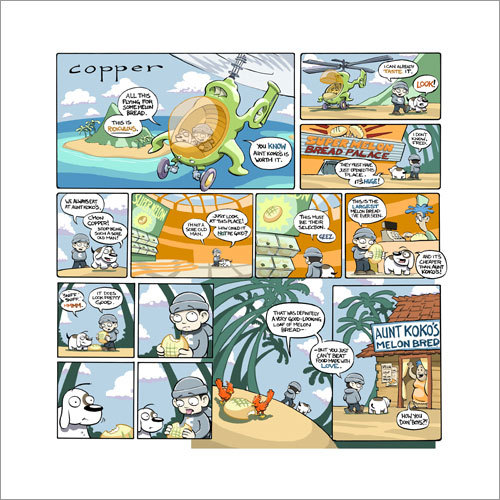