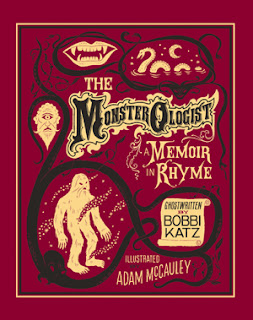 A picture book collection of monster poems in the guise of a memoir of a monster hunter.  What's not to like?

Every couple of years is seems we get a collection of ghoulish rhymes and monster-themed picture books, with one that stands out.  Off the top of my head the only recent one I can think of is Adam Rex's Frankenstein Makes a Sandwich, full of truly odd takes on classic movie monsters.  Bobbi Katz's The Mosterologist is this year's model.

There's little new one can say about classic monsters that hasn't been covered before except to couch them in unusual settings or framed within a larger context.  Here, Katz has "ghostwritten" a memoir of a monster hunter who records his exploits and descriptions in verse.  All the usual suspects are here: Medusa, Frankenstein's monster, Werewolves, a Kraken, but there are some lesser-knowns and a few newly minted monsters in the bunch as well.  Grendel and the Golem don't usually find as much coverage as they do here, "Bluebeard's Personal Ad" will probably fly over the heads of the kids, and the "International Zombie Survey" is a nice take on the current fascination with the living dead (it's a census form).  Making their debut are "The Verbivore" which has eaten the verbs out of a well-known macabre poem ("The Worms Crawl In"), "The Suds-Surfing Sock-Eater," and "The Compu-Monster," which are probably the two weakest poems in the bunch.

For the original monsters, perhaps the problem is that the poems have to explain what these monsters are where the other poems play of some passing familiarity of the subject.  Trolls, Count Dracula, and a cyclops show up in other stories and so don't require an explanation of what they do and why they're monsters.  Also, I have a hard time thinking of a sock eater or a verb eater as being as scary as Grendel's recipe for Danish Pastry (yes, using fresh Danes).

This is one handsome book, by the way.  The cover is embossed and designed to look like a quasi-old leather-bound book, the endpapers are facsimiles of postage stamps featuring various monsters, and the pages are collections of paper ephemera from the Monsterologist's collection with the poems laid out on them. McCauly's art is alternately loose for illustrations but at the same time the "artifacts" are well conceived and look plausible.  It's a nice mix and visually interesting without looking too cluttered or chaotic.

Sounds awesome. And the perfect sort of book for October. I plan on sneaking up on it, slipping a bag over it's head, and dragging it home to enjoy.