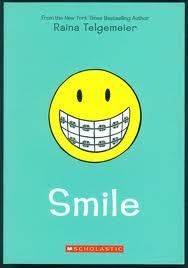 The memoir of the author's teen years told in graphic novel format focusing on her orthodontic adventures following a severe injury.

Everyone has a story tell about themselves, and in theory everyone has a reason for telling that story.  We do this all the time in conversation when someone mentions a topic and our memories spark with a story, account, or anecdote that relates to the topic in question.  In theory the story of ourselves we tell is also appropriate to the situation – when told, for example, about an elderly person's death after a fall we don't automatically launch into a humorous story about that one time we fell while carrying a gallon of mustard and ended up on the floor covered in it.

The memoir is very much like the stories we tell casually.  Unlike a biography which is an attempt to get a story factually straight, or to understand better the person behind the story, the memoir is an elective tale told by the author toward a specific goal or to make a particular point.  And as with any narrative it is presumed that the point of the memoir is the natural accumulation of the episodes depicted, a sort of realization that comes from the conflicts presented.

So we begin smiles with a sixth grade Raina who one day falls and lands on her face, accidentally knocking out her front two teeth.  For the next six years (and 200+ pages) Raina goes through an elaborate series of dental surgeries, adjustments, and reconstructions that would naturally traumatize any teen.  Her circumstances are unique in that she doesn't just need braces, she'll need to have her teeth shifted to fill the gaps, fix an overbite, and then correct for misalignment.

Along the way we learn about Raina's love of video games, her crushes on boys, her artistic temperament.  As she gets older and moves on to high school she feels herself pull away from her friends, or rather, her friends are unchanged and she's moved on.  She finds a new crowd to hang with and in the end is happy with the person she's become.

Initially Raina's friends make fun of her in various situations, mocking her for her "vampire teeth" and and for liking a younger boy, until finally Raina calls them out and walks away for disrespecting her.  This lesson in self-esteem would seem to be the main message of Smile, and not entirely inconsistent with Raina's situation, but I found myself flipping to the last page saying "And?"

As a document in the orthodontic experience Telgemeier's book could serve as an introduction to children who are wondering what they are in for (and aren't easily scared) but these experiences don't fully integrate into the rest of the story.  If the dental sections were removed the story of Raina and her life would remain coherent but the story would reveal itself to be rather weak.  In that sense Smile is like a special effects movie with a weak story constructed to justify what's on the screen.  It isn't necessarily bad, nor is it badly rendered,  but the goal of this memoir is thin at best and takes a backseat to a play-by-play on what to expect when your teeth need correcting.  I never really felt Raina's two worlds connected, and her anxieties are almost indistinguishable from the teen angst of kids who don't have such trauma, that I never really understood what the point of the story was throughout.

A more even balance between both stories, with emphasis on how the surgeries played into the character's esteem, could have made this a winner.
Posted by david elzey at 2:45 PM