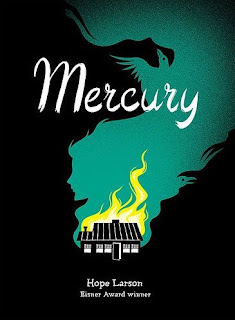 A tale of gold prospecting and romance and karmic debts paid off over several generations with just a kiss of magical realism in this graphic novel.

In the settled Canadian province of Nova Scotia the Fraser's of French Hill have settled into a life of barely sustainable farm life when the mysterious stranger Asa Curry comes calling.  He's discovered gold on the Fraser property and looks to help mine it with a share of the proceeds. In the Fraser household daughter Josey has become smitten with Asa and over time he becomes the forbidden fruit she pledges herself to.  But there's something dark about Asa that causes Josey's mother to worry that he is a harbinger of death.

One hundred and fifty years later the Fraser house has remained in the family but has burned down, causing the current Frasers, Tara and her mother, to become displaced.  While her mother works to find a new job and get settled in a new town, Tara returns to attend high school and, with the aid of a mercury-filled pendant that's been in the family for generations, solve a mystery that connects Tara's story with Josey's.  The phoenix out of the ashes of the house fire, as it were, allows Tara and her mother the chance at a new life that was denied their ancestors.

Jumping back and forth between stories it becomes clear that Tara and Josey's stories will cross paths, but with Larson that doesn't mean it is easy to guess.  The tale of the stranger with seemingly magical (and dark) powers is not unusual for the 18th and 19th centuries, and here those elements are handled as matter-of-fact as we treat the "magic" that allows us to use cell phones today.  This is Larson territory, where the magic is real, and she leaves much for the reader to discover and define for themselves.  Crows with faces of people, "spells" that can see the future, gold-seeking pendants and yellow snake guides are blended with they typical stories of teens encountering first loves and exploring territories as mysterious to them as anything else in this world.

Larson's pacing and scene-setting is measured and exacting – nothing moves too fast or too slow – poetically cinematic in flow.  Having the panels set in the past against black backgrounds, while the present day sections are set against traditional white space, almost seems superfluous because we can the different ages by costume, but in a black and white comic it has the effect of turning the past almost sepia.  The visual darkness takes advantage of our knowledge of the pasts limitations and shrouds them in the darkness of a time before we became "illuminated" and magic was replaced by science and logic.  Larson's magic is elemental – mercury, gold, fire – with powers we can barely contain.  How is that not like love?
Posted by david elzey at 9:51 AM