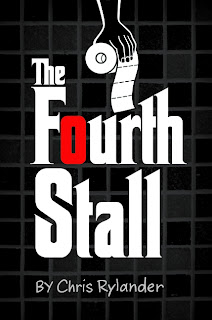 Mac's the guy you go to when you need a problem solved, but when a gambling ring muscles in on his territory has Mac finally come to a problem too big to solve?

Mac is the go-to guy when you got a problem that needs fixing.  Need tickets to an R rated film when you're only in sixth grade?  Mac's your guy. And through a combination of traded favors and cold hard cash there is very little Mac can't fix.  He's a sixth grade wiseguy with integrity, and honest, and he and his friend Vince have built quite a nice little business for themselves in the fourth stall of the East Wing boy's room.  But that all goes south when a third grader comes in for protection from a gambling racket run by a legendary kid named Staples who is looking to muscle in on Mac's territory.  Piece by piece, Mac's quiet little empire falls apart as Staples puts the financial squeeze on kids and sends in his high school thugs to do the dirty work.

On top of all this is Mac's best friend and business manager, Vince. Together they've built the business and have been saving up so that when (not if) the Cubs go to the World Series they'll have enough to buy the tickets.  But there are some problems with the books and all fingers point to Vince.  It's beginning to look like Mac has a mole in his operation, confirmed when he spots Vince taking money from... Staples?  Worse, someone has broken into Mac's room and taken all his business's assets, thousands of dollars worth.  Just when it looks like he's going to have to fold up shop and join Staples, Mac makes a discovery that gives him just enough leverage that might allow him to regain his business and send Staples packing for good.

I think somewhere along the way every middle grade boy has had a fantasy of running some great moneymaking business, and probably out of school if not a vacant stall in a bathroom. They are grandiose schemes built on the fine American notion that if you build it, they will come, never realizing they needed it before. Mac's services provide easy answers to generally easy questions but with some complicated twists. Mac has hired muscle – a loose conglomeration of the school's bullies who can be bought for a price – and the school has a genuine problem with gambling on school sports, athletes who are willing to throw games, and bookies putting the screws on kids who are too young to understand what they're really getting themselves into.  It is the playground made hyper-real, the natural extension of the acceleration of childhood. Like a New Yorker cartoon with kids speaking and behaving as adults, only with a lot more malice involved.

Rylander gets that childhood is a violent mirror of the adult world, and that kids choosing to emulate that world will make the same, and worse, decisions when confronted with trouble. Suspicions will be built on the flimsiest of circumstantial evidence, trusts will be misplaced, character motives will not always seem as clear-cut as they are presented. Mac and Vince grew up together in a poor trailer park, but while Mac's family made it out to relative security things aren't so easy for Vince, and the unspoken tension grows throughout. Vince, it turns out, may have more in common with the super bully Staples which causes Mac to do some serious soul searching (and old fashioned gumshoe work) to better understand their common motivations. The emotional landscape of boys is rich in The Fourth Stall, with plenty of moral ambiguity to cause a careful reader to double-back on their assumptions the same way Mac is forced to throughout the investigations. There is a final confrontation that is inevitable but interesting an open resolution regarding Staples that suggests not all crimes stories are so neatly tied up as they are on TV or in movies.

I keep thinking there has to be a name for this appropriation of adult genres into children's books; taking hard boiled detective, or in this case the gangster-crime boss drama, and layering the stories over a school setting. Odder still, they seem to be winking to an adult audience in doing so, giving a knowing nod to those who would get the book's cultural references. The Forth Stall has a cover that clearly references the book jackets and movie posters for The Godfather. Is a middle school kid going to get the reference?

I only mention it because of the trend within family-centered movies to include references to keep adult chaperones engaged. You have a greater chance of parents spreading the word to other parents, or their willingness to take kids to the movie (and later buying DVDs) if they felt the movie truly had deeper layers for all audiences. This is a smart marketing strategy, and with animation there is a long tradition of making stories accessible, but I wonder if this is really the best approach for books aimed primarily at middle school readers.  Is the idea that the stories will feel more sophisticated and thus "trick" kids into thinking they're reading a more mature book? I think kids are smarter than that, and maybe this is over-thinking. Maybe it's just as savvy a marketing choice to design a book cover with an adult buyer in mind, it makes it easier to sell to a parent of a boy to send a visual cue that says "this book is like a middle grade gangster story, your boy will love it." It may also be savvy of an author to write a book that will entertain an adult agent and editor as a step toward getting published. I've often wondered what would get published if kids were the gatekeepers.

Despite my general misgivings about longer middle grade books, The Fourth Stall justifies its length with action and a quick-paced story.  I don't know if the book is series-worthy, but I'd be very interested to see what Rylander does next.
Posted by david elzey at 8:48 AM