The Extraordinary Mark Twain (According to Susy) 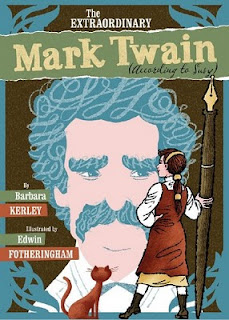 In an everything-old-is-new-again twist we get a biographical picture book portrait of Samuel Langhorne Clemens from a fresh pair of eyes... his daughter's.

"According to Susy, people were... well, just plain wrong about her papa."  And so begins both the story of and about Mark Twain's oldest daughter's attempt to capture the man she knew in her own journal when she was thirteen years old.

What we are treated to is a sort of dual biography of Twain told by dual narrators.  Susy begins her biography of her father in secret but continues on once her parents discover the journal, at which point Twain becomes, and acknowledges, an unreliable subject.  Knowing his daughter is taking notes he deliberately makes scenes to be recorded, but Susy is quick to note they are manufactured.  She also succeeds in recording his routines and unguarded moments.  These don't necessarily contradict our general impression of who Twain was but rounds out more of his life as a working family man, a humorist who his young daughter saw more as a philosopher when not in public.

Both Kerley and Susy manage to keep the focus on Twain, giving is a more balanced view of the subject.  We see so little of Susy beyond the part of her journal that include her in family outings, but she gives us a glimpse now and then. We sense that daughter who longed to set the record straight about her Papa, and who felt the need to preserve a certain unvarnished truth about a man the public saw only in one or two dimensions. In the backmatter, Kerely includes a single page of instructions for how the reader can write a biography about a member of the family, using Suzy's approach to gathering and presenting material.  I found it instantly fascinating how well both Kerley and Susy could draw a rounded picture of their subject by following these guidelines... and how much they underscore what we don't know about Susy Clemens herself. It's only natural that we see Twain and his family during the brief year Susy is taking note, and limited to those passages that illuminate the portrait provided, but I did finish the book wanting to know more about Susy.

The text itself co-mingles actual quotes with original narrative and highlights the quoted material in a way that makes it stand out on the page.  This is something I have actually advocated for in picture book biographies as a quick, visual way to clue the reader in on which words can be documented and which are authorial summary.  What I hadn't expected, and hat shows up occasionally here, are fragments of sentences and phrases that end up strung together in a Zagat restaurant review sort of format.  Here, Kerley is describing where Twain found his daughter's journal with his biography inside:

He examined the book with "deep pleasure," delighting in Suzy's "frequently desperate" spelling. He approved of how she didn't "cover up one's deficiencies but gave them equal showing with one's handsomer qualities."

While these sentences read cleanly aloud, they take on an awkward quality on the page that I hadn't previously considered. I was first drawn to this problem of highlighted attribution with Jeanette Winter's My Name is Georgia where quoted material was not only italicized but mixed with narrative written in the first person. By avoiding the first person -- and by including whole chunks of Susy's journal in tact as inserts throughout the book -- Kerley instead juggles three voices in the text: Susy's journal, Twain's observations after the fact, and her own. It's a fairly sophisticated approach and what it might lack in visual cleanliness it more than makes up for in its sturdy, well told narrative.


This is the second time Kerley has been paired up with Fotheringham and I think it makes for a winning combination.  In What To Do About Alice I made note that I thought Fotheringham's  illustrations weren't up to his usual standard, but that isn't the case here.  Using a rich set of tones that at once nostalgic yet modern, Fotheringham juxtaposes sturdy caricature illustrations of Twain and his family alongside more impressionistic details of buildings and animals for a layering effect that makes the focus of each spread pop.  And throughout words, either spoken or written, fly about the pages like filigree curlicues from a fountain pen.  It's a nice abstract touch that adds a sense of animation to illustrations.

Kereley once again sets a standard for picture book biographies with a fresh approach and solid research.

(Whoa, that ended up sounding a little too blurb-y.)
Posted by david elzey at 7:44 AM

I liked this book much better than What To Do About Alice, mainly because I think of Alice Roosevelt as a Paris Hilton-type figure and not great bio material. Mark Twain is much more significant, and I loved the Suzy/Twain connection.