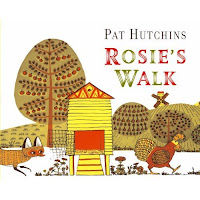 written and illustrated by
Pat Hutchins
Simon and Schuster 1968

A Chicken, a fox, a handful of prepositions... and a lot more story than what's in the text!

It might be fun to try and review a picture book using as many words as are in the text. To do that, I would have to stop the review right here.

Some other time perhaps.

Rosie the end leaves her protected hutch and goes for a walk, unaware of a fox who has his eyes set on an easy lunch. In a single opening spread we are introduced to a protagonist, an antagonist, a plot and a subplot, a location, and already a rising tension. Will Rosie make it home safely? How will the fox be foiled?  So much tension! 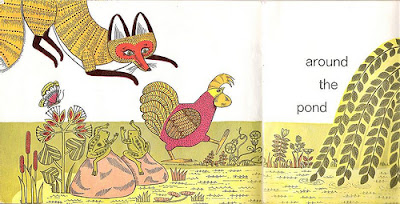 As the fox follows Rosie narrowly escape through a series of actions worthy of great Warner Brothers cartoons.  The fox steps on a rake and is smashed in the face. He leaps and lands in a pond.  As he lurks near the mill Rosie unknowingly sends a sack of flour onto the fox.  Finally, due to a culmination of events, the fox has angered several hives worth of bees who run him off while Rosie happily, obliviously, returns home in time for dinner.

Or was she really that oblivious?

First, a little bit about the mechanics.  Technically the book is one long sentence:

Rosie the hen went for a walk, across the yard, around the pond, over the haystack, past the mill, through the fence, under the beehives, and got back in time for dinner.

I've added the commas for reading clarity and to indicate page breaks, but the text does include only one capital letter and one period.  And going by text alone you wouldn't think there was much of a story there, but this is what picture books are all about.  The intermarriage of word and picture is what brings about the subplot, the unnamed and unmentioned fox who is stalking Rosie.  The tension between the word and picture is echoed in the tension between what Rosie knows and what the reader knows. Really, this is more sophisticated than it appears on the surface. 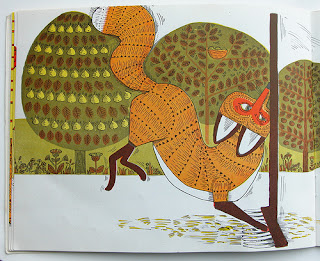 Now, as for Rosie, she spends the entire book strutting across the page with her head up and a carefree look on her face.... or is it?  Could it be that Rosie is aware of the fox and is deliberately taking him for the walk?  This is where a clever book rewards rereaders with a different experience.  On the first pass readers worry about Rosie by completing or recombining the narrative to gain meaning; on the second pass the reader already knows what to expect from the story and they use the visual cues to recombine the narrative into a totally new meaning.  Even if after ever page turn the young reader turns back to look for the clues they missed that lead to the action they've just experienced they are composing new meaning.  The first time it's "Look out, Rosie!" and the next time it's "Look out, fox!"

It would seem difficult to find fault with a picture book that does so much with so little, and yet, is it possible that the text is too long?  Okay, so maybe we're entering crazyville here, but given that we don't need to be told she is being followed by a fox, do we need to know that Rosie is a hen?  Look at the text above.  If we remove "the hen" from the text nothing changes, and from the interplay between word and image it would still be clear which character the story was about. I'll grant, it's picking nits, but those two words constitute 1/16 of the text, so I want to be sure I understand their point and purpose.

The answer is as easy as reading the book both ways out loud. The answer is flow.  Grammatically the sentence-text if fine without "the hen" but reading it aloud gives the opening a clipped hiccup that utterly destroys the narrative flow.  So while far too often it can seem like a simple text could be shortened (and sometimes by as much as 50%) here the two "extraneous" words satisfy our ear and allow us to feel the rhythm of the story just as quickly as the images and their interplay with the text gives us all the information we need to know about the story.

So it is, that Rosie the hen leaves home and takes a heroes journey, facing (away from) trials and tribulations, to return home triumphantly in time for dinner. And as Sendak's Max has taught us, no doubt Rosie's dinner is still hot.
Posted by david elzey at 9:05 AM