The Secret of the Yellow Death 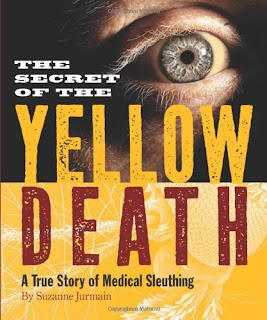 A compelling account of how early medical researchers discovered and isolated the causes of yellow fever in the early part of the 20th century.

Don't start this book if you have just eaten, and I might make the same recommendation for the following description of the symptoms that open The Secret of the Yellow Death: at onset, an icy chill, followed by a crushing headache, yellowing skin and the whites of eyes the color of lemons, delirium and blood-clotted vomit come next and violent spasms.  Within three days a victim could be dead.

You would think that something this virulent would have had its heyday during the plague years, hundreds of years ago, but the outbreak that consumed Cuba and eventually lead to the discovery of the yellow fever virus happened barely 100 years ago. That a combined team of scientists from the United States and Cuba solved the mystery through dogged determination despite a general disbelief among other scientists that mosquitoes were the carrier gives the story its tension. After all, if it wasn't mosquitoes, then what was the cause?

Heading up the team was Walter Reed, a doctor who was sure that the source of the outbreak that was sweeping across Cuba could be discovered.  Even from a distance, when he was called back to the States, Reed kept contact with the team of four other doctors who attempted to actively manufacture ill patients in order to prove their theories.  Even as they had successes, managing to grow carrier mosquitoes and getting them to bite willing recruits, some managed to avoid illness.  At each turn it is as if the solution is within reach and then comes another setback. But with each trial and set of circumstances they learn a little more until, finally, they isolate the virus and understand the gestation period and the crucial timing necessary to replicate the illness in a controlled setting.  But many of the doctors involved died before the final results were discovered and understood by those who carried their efforts forward.

It's a compelling mystery because of the variables that must be discovered both through trial and error and because little was known or understood about the simple organisms known as viruses.  Jurmain has chosen to get close to the story, to use primary source material to reconstruct the narrative of how the scientists worked to come to a conclusion.  She admits early on that she is unable to include source material for the Cuban doctors involved because that material is unavailable.  It would be nice to think that some day normalized relations between Cuba and the US might give us the full picture of the story, but as it is written there are few missing gaps of consequence and the story doesn't suffer for the lack.

While not profusely illustrated it does contain plenty of photos from the era that remind the reader just how crude the practice of medicine was just 100 years ago. The crude hospital and research facilities, the crude metal syringes, and the handwritten medical charts all add to the overall mood of the story, yellowed with age and looking for all the world like they might still carry the sickness with them.  There is an appropriate creepiness to The Secret of the Yellow Death and that will be a huge part of its appeal to readers.  Gross when it needs to be, creepy and disgusting in a scientific setting, and the constant question – are they ever going to figure this out? – combine for a compelling read.
Posted by david elzey at 8:00 AM

I'll definitely take a look. Our 7th grade sometimes does a unit on infectious diseases and wants lists of literature to go with it!