Do You Know What I'm Going To Do Next Saturday? 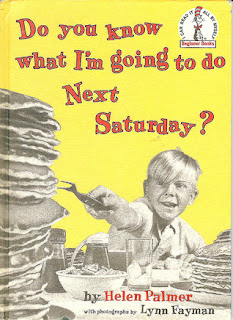 
One tow-headed boy's laundry list of what he intends to do includes a good deal of eating and pretty large amount of time hanging out with the Marines.  Includes gun play.

This is perhaps Palmer and Fayman's finest collaboration and also it's most incendiary by modern standards.  A boy – let's call him Timmy in honor the owner of TVs Lassie, a generic type of the era – is standing around telling a younger boy of his plans for his next day of leisure. The younger boy is attentive on this first page and we won't see him again until the last page.

Timmy has big plans.  He's going to eat a breakfast that includes both donuts and pancakes, more pancakes than you'd probably eat at home in a year. Then he's going to work off those carbs by swimming, playing five games of tennis simultaneously, then beat an entire team at beach volleyball. A few ice cream sodas as a snack and then it's back to two-fisted bowling, water skiing, scuba diving, and a little wire walking.

Then things get interesting. 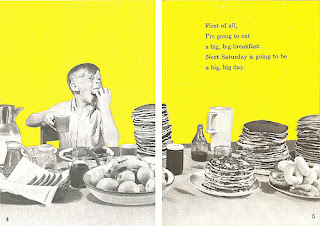 Timmy's going to fly around in a military jet, then in a military helicopter.  Okay, so maybe this Timmy has a friend or relative in the military.  No biggie.  A massive lunch later and Timmy's off to get a haircut but... wait a minute.  This barber is giving military buzz cuts. Four pages of the razor horror sends Timmy running down the railroad tracks vowing to keep his hair at all costs!

But then he hitches up with the Marines.  "Did you ever play with the United States Marines?" he asks the reader.  Why, no, Timmy.  It never occurred to me that that was an option for a seven year old boy.

"Shooting!  I'll got shooting with the United States Marines."  And sure enough, Timmy's there, gun in hand.  He's also at the firing range with a semi-automatic rifle.  Niiice.

After yet another meal (because we all know how boys love to eat) Timmy goes through all the basic training, beating every Marine in sight, but finally making his escape to do other things on his list.  No one holds Timmy down, not even the Marines!  But that escape left him hungry, so Timmy eats a hundred miles of spaghetti which earns him a spot leading the Marine band, a fine finish to a bust Saturday.

Oh, and that other boy he was bragging to in the beginning?  He's fast asleep on the last page.  Yes, sir!

In some ways this book needs to be seen to be believed, but someone else has already uploaded it as a Flickr set which you can check out right here.  You'll see, I didn't exaggerate the summary one bit. 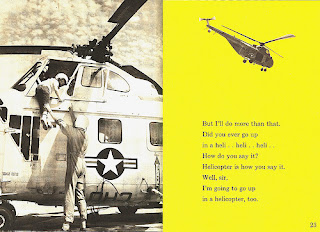 It's interesting that no one considered it unusual to depict a boy talking about and joining up with a branch of the military, or handling real guns.  It's entirely consistent with my memories growing up of reenacting the war movies we saw on TV and owning blank guns and water pistols.  We cannot imagine putting a weapon in the hand of a child today, much less in the hands of a child in a beginning reader, yet boys today still do play at war and own water cannons and imitate the imaginary battles they see in video games.  In that sense it almost feels hypocritical that books don't accurately reflect the world of the boy today, that we have gotten so politically correct that we feel the problems of the influence of violence somehow rested in books and not in a culture that continues to supply children with the tools and images of violence.

The same with food. I cannot imagine a book today "promoting" this sense of unbalanced and unbridled eating that takes place here, but what's beyond the images?  This is a story of a boy bragging, and so naturally he isn't going to be bragging about getting his three-to-five servings of fruit and vegetables and making sure he doesn't exceed his 2000 calorie daily limit. And despite all the sugars and fats, this was 1963 and there wasn't a drop of high fructose corn syrup to trigger onset diabetes.  The boy is active and there's no room for sitting around with video games eating empty snack calories, no fat-saturated fast foods to bring on childhood obesity.  To our modern eyes we see the horrors of caloric excess but we fail to acknowledge that removing these images from books didn't make kids healthier.  As with guns, the problems exist outside the book and rest with a culture of denial.

Something I didn't know until I did some digging was that in the pre- and early internet days the rumor was that this book had been banned by the good Dr. Seuss himself, primarily because it advocates suicide.  WHAT?!  Apparently, between all the guns and the phrase "Next Saturday I'm going to blow my head off!" (in reference to playing a tuba), along with the fact that Palmer committed suicide herself a few years later after developing cancer, the assumption was the book was... well, yo now how rumors go. Unfortunate wording aside, it's a pretty big stretch to read into that tuba playing as a coded message to kids. 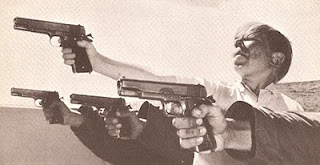 So what have we learned this week from the mostly out-of-print oeuvre of Helen Palmer?  If we strip away the photos – as much for their dated qualities as their racial bias – we have books that celebrate the childhood imagination at its most uninhibited. We saw boys using tools unsupervised and with the freedom to learn about and solve design problems through physical experience.  We saw children fearlessly interacting with animals in a (mostly) respectful manner.  We heard the natural exaggerations of childhood told in a realistic and authentic manner without judgment or moralizing. In short, the Palmer-Fayman books validated and mirrored the experiential world of beginning readers who, like most of us, want to see something we can relate to in our reading.

From an historical perspective these books seem bizarre, and at times it is hard to deny the amazement that catches us off guard when we see things like a child handling a gun.  But at their core they are brave and bold, and more importantly honest, portrayals of a time when children's books trusted the reader's intelligence enough not to insult it was false safeties.  These books did not assume or remove the role of the parent in teaching their children right from wrong.  If anything these titles and their imagery remind us that reading, beginning reading, is not a passive activity meant to serve as a passive minder, reading is an activity meant to engender thought and meaning.

By making books "responsible" and "safe" for children we have abdicated our adult duties in knowing what our children are reading.  We no longer need to worry if a book contains materials we object to, and if they do we threaten to sue the publisher or have them banned from a library or threaten a politician's next election by forcing them to take action.  The irresponsibility we see in these books is really just the reflection of our own guilty conscious asking why we have chosen false battles in the name of protecting the children.

Finally, I should mention that Helen Palmer does still have one book in print called A Fish Out of Water (1961).  Based on a story Dr. Seuss published in 1950 called "Gustav the Goldfish" (which will be part of a collection of new Seuss stories to be printed this fall), it is the story of a boy in charge of a pet shop who is warned not to overfeed the fish.  When he does the fish grows to troubling proportions, causing the pet shop owner to come and (mysteriously) save the day.  Unlike Palmer's other books it was illustrated by P.D. Eastman which manages to prevent it from looking aged.  Also unlike other Palmer books the boys misbehavior results in catastrophies that require the help of adults (police officer, pet shop owner) to help him solve.  The book ends with a moral message, the boy promising never to disobey and overfeed the fish.

This is the type of thing that is still safe. Obey authority figures, let adults solve your problems, and trust that fantasy illustrations aren't as dangerous as photographs.  Perhaps the reason Seuss let his wife adapt the original in the first place was because even he knew it was lacking the subversive qualities that made his own work resonate with readers.
Posted by david elzey at 10:34 AM