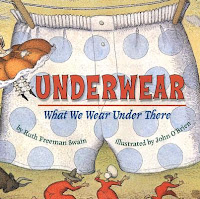 A picture book history of undergarments over the ages that provides some basic coverage but nonetheless has a few holes.

This was a book on my radar some time ago that dropped off and resurfaced mysteriously.  All I could remember going in was how I thought this was the perfect subject for a picture book, something that might pair nicely with Fartiste, or perhaps even Captain Underpants.

For the most part what we get is serviceable.  The book moves historically from breechclouts  and loincloths through the middle ages, hop skit fads, corsets and nylons, and diapers ancient and modern.  The problem for me occurs early on when we start getting some unfamiliar vocabulary and nothing to help us understand it. "During the Middle Ages in Europe, women wore coarse shifts over their loincloths for warmth."  Having only previously been told about loincloths as the single bandage-wrap ancient Egyptians wore, and with no idea what the shape and covering a shift looks like, all we are given as an illustration is a single panel showing a pair of knights jousting.  We sort of get a glimpse of a shapeless garment that might be a shift a couple pages later hanging from a clothes line, but not enough to really understand its coverage or purpose.

Other unexplained and unseen garments include doublets, petticoats, bloomers and the actual Chinese pants that are constructed in a way that allowed for easy access when using the bathroom.  Pants that open when you squat and close when you stand up?  I have seen these pants and they are an interesting point in fashion engineering and would be the sort of thing a reader would also want to see.

It's difficult to pin down the source of the problem here.  The book is clearly researched, with an easy-to-read text, but fails to really give us a sense of what the evolution of underwear looked like.  This is a picture book, so that point is unforgivable.  At the same time, working only from the text, an illustrator might have felt limited without doing the author's research all over.  I would like to think that an editor would make sure the illustrator had everything they needed in the way of source materials, or that the pictures illuminated what was hinted at in the text, but that isn't the case here.

So in the end Underwear: What We Wear Under There gives us a peek at at unmentionables but fails to provide enough coverage to satisfy.
Posted by david elzey at 11:56 AM

Haven't seen this one but will have to take a look. My students love How underwear got there : a brief history by Kathy Shaskan. Perhaps that would be a better book for you.