Why I Built the Boogle House 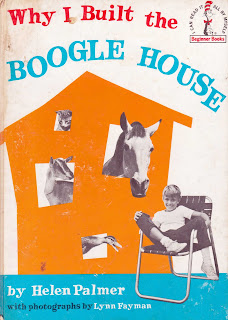 A boy trades up from a turtle to increasing larger pets, building and modifying homes for them, until finally he has a house big enough for a Boogle. (What's a Boogle?)

It starts with a turtle, a pet this boy has always wanted.  He builds a house for it to live in out of wood.  The next day the turtle has run away.  He wants a new pet.  He goes down to the pond and snatches a duck.  The duck doesn't fit in the turtle house so he modifies the house until the duck fits.  But the duck is noisy so he trades it for a kitten.  Now the house is too small for a kitten, so he builds it up until it's large enough. This goes on.  Kitten for a rabbit, rabbit for a dog, dog for a goat, goat for a horse. When the house for a horse draws the attention of the police who inform him that he can't keep a horse in his backyard the boy decides to dedicate the house to the imaginary Boogle he hopes to catch one day.  In the meantime he has outfitted his Boogle house into a rather nice private clubhouse with plants and a beaded curtain. 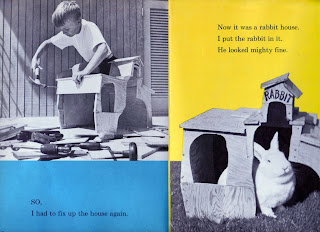 I love the innocence of children's books from the early days.  So free of concerns about children emulating behavior and notions of property and fears of litigation.  There's a reason this book is out of print, and it has nothing to do with the dated photos from the early 1960s.

Putting aside the problems of appropriating ones pets from local ponds (and the lack of concern for feeding any of the pets, which is perhaps why they tend to run away or become a nuisence) what Why I Built the Boogle House has going for it is the unbridled enthusiasm this boy has in building homes for these animals.  That and a seemingly endless supply of lumber and access to hand tools.  I'm not even going to pretend that this book didn't somehow inspire me to want to do the same thing (and longtime readers may remember I once tried to convince my parents to let me have a pet squirrel in our apartment when I was around 6 years old). 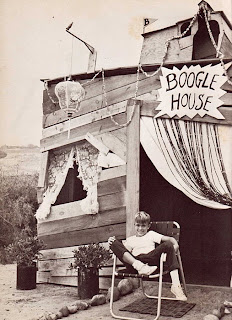 What this dated title by Dr. Seuss's first wife gets right is the mindset of a boy, albeit short-sighted in some ways, who recognizes that caring for a pet means providing for it as best he can.  In the pre-feminist way that dolls and doll play helped girls prepare for their lives as housewives and mothers, boys with their ownership of pets helped condition them to the notion of having and providing for families.  Trading up, the great American Dream of building bigger and better, the idea of not only making something with your hands but doing so with a purpose, these are the messages that truly explain why the boy, anyone really, sets out to build a Boogle house.  The Boogle, though the boy thinks he's hedging his bets by building for something that cannot be outgrown, is actually the future, his future.  The Boogle house his is retirement plan, his real estate venture, his safety net.  We build toward the eventuality of what we one day might need. It is a lesson about saving and planning, and one we have drifted far from in the past 50 years.

As best as I can tell, Helen Palmer published four children's books under her name, the only one still in print being A Fish Out of Water which was originally a story by Dr. Seuss called "Gustav the Goldfish" which appeared in Redbook magazine in 1950.  The other three books – Why I Built the Boogle House, Do You Know What I'm Going To Do Next Saturday, and I Was Kissed By a Seal at the Zoo – are decidedly different in that they use black and white photos (which conventional wisdom claims don't age well with readers) and feature situations and ideas which are no longer in favor with modern reader.  Or rather, they are no longer in favor with adults, because as Maurice Sendak reminds us, “Books don’t go out of fashion with children. They just go out of fashion with adults and publishers.”

I hunted these books down because they became dislodged from the deep storage of my memory banks and I wanted to understand why they had disappeared both in print and from memory.  For the most part I think the memory question is answered with "out of sight, out of mind." Many of not most of the books from my childhood never survived my childhood. Either from neglect on my part or destruction at the hands of my younger sibling, or perhaps in one of my mother's general purges (which might also explain my book hoarding... hmm), few of the books I owned made it into my teen years. Decades later, as memories of childhood books began to resurface I became driven to locate as many as possible, if for no other reason that reassure myself that I wasn't crazy – those books did exist!  Yes, it turns out, there was a children's book where a boy fires guns at a rifle range with the Marines, and another where kids play with lion cubs, and even a picture book by Aldous Huxley. There are some pretty interesting nuggets when you go digging around the past in children's literature.

With that in mind, later this week I'll be looking at the two other books by Palmer and casually examining how things have changed for both children and books since the early 1960s.  I would love to hear what your memories were of children's books from the past, not just the Helen Palmer books but about any. What books have gone out of print in your time, what lost treasures have you gone looking for?
Posted by david elzey at 10:55 AM

This looks oddly familiar. I bet that I read all the Helen Palmer books at one point. Thanks for the trip down memory lane.

Amazing, I have all of the Palmer books you mentioned still at my parents house. I never connected the author as Suess's wife. I reread Boogle House, but have the others along with many of my childhood books, except for "Will You Come To My Party" which I replaced used a few years back. I agree that much of what was ok to read 50 years ago has changed both for better and for worse.