I Was Kissed By a Seal at the Zoo 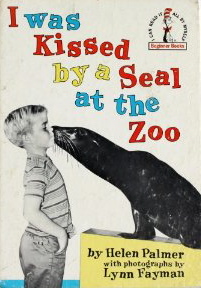 
A group of kids go to the zoo and do things no kid would ever be allowed to do, setting up some false expectations and perhaps forever ruining the notion of zoos to children forever.

"What would you do if you went to the zoo?" is the question posed to a number of children.  One would want to play with a baby lion, another would make friends with a walrus, one would escort his brother around the petting zoo, another would help out with the baby elephant, the chimps, the penguins, and finally the titular seal.  "Those are the things we would do at the zoo. And do you know something? We went there! And we did them."

Cruel, cruel world, giving children books featuring photos of real kids really doing these things.  Playing with a lion cub like it was a kitten, spending time with the trainers while they care for and train walruses and elephants, waddling around with penguins and petting gazelles.  It's no mystery why this book is no longer in print: think of the poor parents! Think of the poor zoos having to tell kids that, no, they don't just let kids wander around the exhibits just because they want to. Not these days, and I sincerely doubt they ever did. 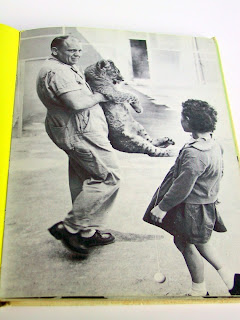 No, what Palmer does is begin with this premise of asking kids what they would do – simple wishing, not harmful and not unusual – then presents these fantasies with photos that suggest these wishes are possible.  Now, no one wants to bring up a kid's expectations only to let them down, but Palmer goes one step too far in the end by showing us a line-up of the kids featured throughout the book with the closing note that they really did these things. Perhaps a follow-up title would have been I Played Keep-Away From a Shark at the Aquarium!

If reading Why I Built the Boogle House planted the seed of catching my own wild pets, I Was Kissed by a Seal... no doubt made me excited the next time my parents told me we were going to the zoo.  It wouldn't have been the same zoo in the book but why would I believe that all zoos were alike?  Why not expect an all-access pass to any animal that captured my fancy? 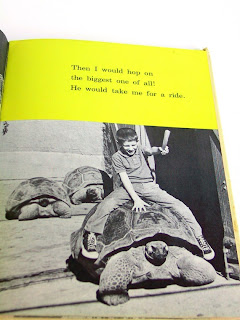 Growing up in the 60s and 70s my generation experienced first-hand the repercussions of the lies of post-war America. The optimism of the 1950s that crumbled during the Vietnam era were largely the result of kids realizing that the world was nothing like the promises delivered to them on a regular basis.  It isn't simply a question of being denied jet packs and space-age living, but the collection of promises we watched erode over time. It begins simply with a denial to play with lion cubs at the zoo but eventually includes the myths of family life as presented on TV, the casual lies of advertising, the college education as a guarantee of employment, the job for life and the retirement plan that takes care of all your needs.  The sting of reality was impossible to ignore while our parents tried to explain to us the deaths of Bobby Kennedy and Dr. King, or why they would turn off the news when they heard any mention of the "conflict" in Southeast Asia.  They couldn't even call it a war.

No, they could no longer offer beginning readers a world that never existed.  The fantasy of I Wish That I Had Duck Feet is fine, escapism and childhood fancy could still be found in the reportage of a book like A Hole is to Dig, but none of this photo-realism to serve as false documentary.

Perhaps I'm being unfair to a cherished childhood memory.  Perhaps the real reason the book went out of print, and rightly so. was because there wasn't a single non-white child in the bunch.  That arrogance of the white default is still around in publishing, despite Ezra Jack Keats' The Snowy Day arriving a year after I Was Kissed by a Seal... proved that kids don't see color as a difference, they have to be taught it.

No matter what, I cannot shake the deep rivers of nostalgia this book opens up.  Sadly, I can no longer see it with the same innocent eyes.
Posted by david elzey at 12:30 PM

This same author-photographer team also produced Do You Know What I'm Going to Do Next Saturday?, an even more outlandish book, using the same technique of staged photos. And the result is just as out of synch with our time.

i'll be getting to SATURDAY on friday...

Now you're just confusing me.