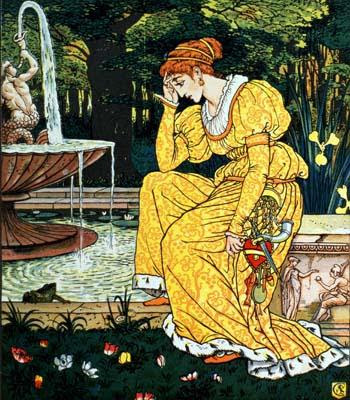 The Frog King, or Iron Heinrich

Yeah, that's what I thought before I ever really read the story. Fairy tales with Princesses and kiss-releasing spells never did anything for me as a kid so even if I had been exposed to that particular plot summary I probably blocked it out with some sort of cootie guard.

The story concerns the King's youngest daughter, playing with a special golden ball down by the pond. When she loses her ball of solid gold in the water she cries. Frog appears and barters with the Princess; he'll retrieve her ball if she'll take him home and treat her as an equal. Never intending to follow through she promises then goes running off, tra-la-la la-la!

The next day Frog finally has made it to the front door of the palace. The Princess opens the door, sees Frog, then slams the door in horror. After some fatherly prodding the Princess tells all. The King, an honest and noble man, insists that his daughter keep her word. She brings Frog to the table and they share food from the same plate. But it's too much for the Princess when Frog insists on sharing her bed and she does the only thing she can think to do.

She throws Frog against the wall with the intent to kill him.

This instantly changes him into a handsome Prince (no kissing involved at all!) and while waiting for his servants to collect him and his bride-to-be explains that he was under a witches spell that could not be undone by anyone but her. And Heinrich? He was the Prince's personal servant, heavy with the sorrow of having lost his master, but so full of joy at the lifting of the spell that his heart bursts the metal bands he had placed around it to contain his sorrow. Uh, yeah.

So what's missing from this story are a couple of details, like why the witch put him under the spell and why this ungrateful wretch of a girl would be his salvation. Seriously, if the only way to be released from a spell is to have someone you are potentially going to marry hate you to the point of wanting to kill you, flinging your poor Frog body against a wall, what does that say about either party?

I suppose the main point is that one honors ones agreements, no matter what species, and that the Princess was a bit of a spoiled snot and should have behaved better. But we live in a different world and I fear there's no way any child today would hear this story without trying to fling frogs against a wall to see if they transform.
Posted by david elzey at 11:28 PM