Grimmoire 4: A Tale About the Boy Who Went Forth to Learn What Fear Was 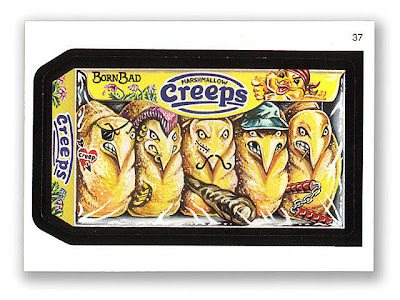 This mess of a story concerns a boy who is so feeble that he feels he cannot make anything in life until he knows what the creeps are, as in, when something give you the creeps. Expelled from his home from ineptitude after pushing the local sexton down the stairs (and rightfully so) he bumbles about in search of the creeps. Along the way many offer to show the boy the creeps in exchange for his money but he turns out to be just too stupid to be scared.

Finally he comes upon a king who offers him a handsome reward (money, his daughter, a kingdom, you know the drill) if he can spend three nights in a haunted house. Ah, so here's where that old chestnut comes from! In spending the nights he manages to chase off phantom and ghost as he continues to lack a clue about what the creeps are.

Married to the kings daughter after passing his ordeal he is still miserable, lamenting over and over how much he wishes he knew what the creeps were. A chambermaid finally decides to teach him by fetching a pail full of water filled with minnows and dumping it on the boy in his bed while he sleep.

Basically, for this dimwit, the creeps are a big Shut up already!

For me this was like a bad episode of The Lucy Show where you keep waiting for something to happen, something amusing or scary or just something. Anything. And then it ends like a shaggy dog story, or a joke whose punchline only makes sense if the word "creep" is some sort of cultural shorthand for "splashed with fishes while you sleep".