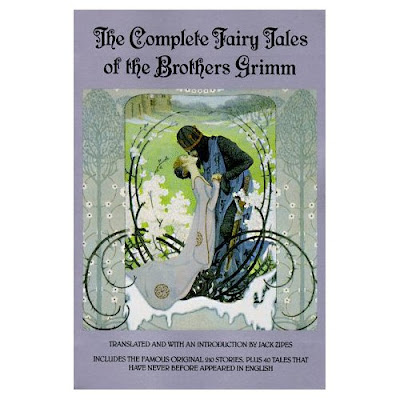 The other day I happened to catch a passing fancy that was Jack Zipes The Complete Fairy Tales of the Brothers Grimm. I remember reading the Grimm tales -- or at least an edited collection of them -- long ago and once upon a time. These were early college days and it felt heady and somehow arrogant to think that, as I read these unvarnished tales, I had finally come to see the real Grimm tales.

While it is true that there was much I thought I knew, was sure I knew, and things I suspected might be true the truth (at the time) was that I was seeing most of the stories for the first time. After some examination it was clear that all my knowledge of the classic Grimm tales had come from secondary and questionable sources. Disney adaptations and parodies from Rocky and Bullwinkle were the prime culprits, in much the same way that all some people know of The Barber of Seville comes from Bugs Bunny. I should have been ashamed and embarrassed at my own ignorance but at no point had anyone ever sat me down and told me that the tales were important. Grimm Fairy Tales were a lower form of cultural currency, a literacy one could easily fake.

After all these years -- more than half a lifetime now -- I'm coming back to the Brothers Grimm because something in me is telling me it's time. Actually that something is very specific, a tale that once again proved I know even less than I once thought I did. Using the Random Page Test on the Zipes anthology I alighted on a tale that on the surface didn't look at all familiar. By the end of the first paragraph I realized I had seen the story dozens of times before, sometimes three or four times a year.

Often as a forwarded email. 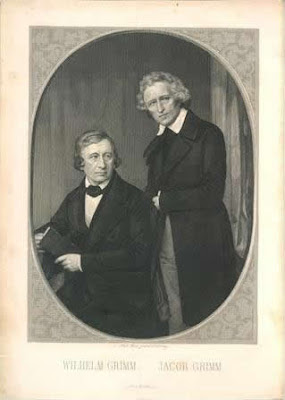 A story with a punchline, the type of office humor that feels both familiar and pedestrian all at once, always attributed to any number of sources but never as a tale (almost verbatim!) from Grimm.

Some people feel it necessary to devote their life to Joyce's Ulysses, others to use of punctuation in cummings. My goals aren't so lofty: I'm going to attempt to read A-Grimm-A-Day for the rest of this year. I'd like to promise that I'll review each of the stories as I read them but I know better. I'll be realistic and commit to at least one story-review a week, more as I can. This allows for the possibility that some of the stories are scheisse or just aren't worth the verbiage. It also gives me some wiggle room to be lazy.

Oh, but i will read a story a day. I can mange that. And maybe by the end of the year, after tale 279, I can finally, honestly say I've read The Complete Fairy Tales of the Brothers Grimm.
Posted by david elzey at 10:43 PM

Can you tell I've been swamped lately and am just now catching up on your blog?

I am in love with this idea. Thank you. I just read your post on the Virgin Mary tale. Do you have Maria Tatar's The Annotated Brothers Grimm? I'm sitting on it, having received it as a Christmas gift, but -- in true nerd fashion -- I'm not reading it 'til I finish my copy of her Annotated Classic Fairy Tales. Anyway, you might be interested in that.

In grad school (for Information Science), I did an annotation -- via HTML -- of The Frog Prince. I just FTP'ed it over if you want to see it at http://blaine.org/jules/frogking.html. I humbly say this; feel free to ignore. I hope I successfully sent all the files over. Oh, and just ignore "The Quiz." Almost embarrassing. I was required to add a quiz, and, well, that whole page is just bad.

We were also learning HTML and navigation in this course, so it might be really old skool in terms of navigation? Hell, I don't know. I just got all inspired by your posts to go find it and send it to the Web. That's my story, and I'm stickin' to it.

honestly, jules, if i had all the time in the world -- and i mean ALL the time in the world -- i would love to do nothing better than study grimm and the entire history of storytelling in as great detail as your annotation. that isn't sucking up, that's just a simple fact. i can't really explain it but i get a really deep feeling when it comes to stories and the oral tradition and...

I hear ya. Me, too. I want to be a Grimms scholar in my next life.

This is a fantastic effort. I'm co-teaching an online grad course in fairy tales for Rutgers this summer (did it 3 years ago and had a blast), but I must admit I haven't read every single Grimm tale since childhood (and even then I bet I skipped a few). Love the posts so far.