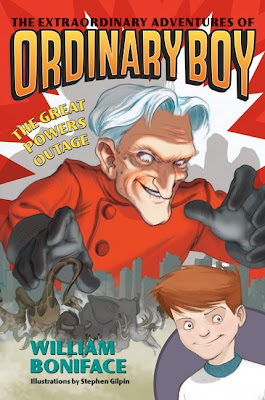 What happens when you take a juvenile comic book storyline, one that would typically be 32 pages in length, pretend it's a title worthy of "prestige" dimensions of 72 pages, then convert it into a middle grade narrative that lasts for nearly 350 pages?

I don't want to talk about this book, I want to put a call out there to teachers and librarians: how many kids are asking for books about superheroes? How many out there are so vested in this series that they've been anxiously awaiting the third installment? I want a sense of the numbers of reader actively seeking this book out and not just plopped into their hands when they are at their wits end for what to recommend for a boy into superheroes.

I mean, wouldn't it be better to not pretend that this is better than having them read comics? Isn't it an admission of failure in publishing that they feel they have to compete with comics on this level?

Okay, I'll say this much about the book. Having read all three books in the series I could see maybe - maybe - the foundation for a TV cartoon series. But it would be half-hour episodes befitting their storylines and not padded to three-hour long endurance marathons. This series would benefit from some serious rejiggering. Pull these stories down to under a hundred pages and focus on the series readers. Quit clogging the middle grade shelves with pulp just because you can, HarperCollins.
Posted by david elzey at 4:02 AM

Every time I see yet another article or workshop about why it's good for kids to be reading comics, I wonder who still hasn't gotten the memo on that one. It does make one despair a bit.

Now, hold on. Are you saying you think kids reading comics is bad? My personal gripe is with publishers who can't tell the difference between what is suitable for a middle grade book and what should be passed over, or at the very least considered as possible graphic novel.

I think we agree here, I just wanted to be clear on my end.

David—Thank you for your holding all of us to high standards, to precision of thought and word. Thanks, I'm saying, for your comment on my blog just now. It is a good sign that YA books aren't being affected, but I guess I care deeply about all books. Reading the new John Berger that is brilliant (I'll blog about it soon). No way would this book ever be deemed a blockbuster. But oh what lines would have been lost had it never seen the light of day.

I read YA as an adult, I encourage young readers to read books published for adults...I'm always crossing those lines in my thinking about publishing.

Actually, several students DID come to me and ask when I would have the third. Students liked the first two so much that they pooled their money and donated AR tests. They are rarely on the shelf. That said, even though I read these, I can't remember much about them. I don't think that they are horrible, and they do have several elements that appeal to students. Oddly, it is NOT my students who like comics that read these-- it is students interested in fantasy but who have limited vocabulary who seem to enjoy these.

AR - isn't that the "Accelerated Reading" program reduces readers into Pavlovian performance readers, trading out the pleasure of reading for the "rewards" doled out for answering quizzes on books?

I realize that almost half the schools in this country use the Renaissance Learning AR program. I am also aware of the fact that many schools and libraries won't purchase books that aren't on the list, which in turn influences what books children see.

With the added "plus" that the program promotes reading as a competitive activity, I'm going to have to wonder if publishers don't allow books to be longer because a longer books = higher points on the AR quizzes, which makes them more desirable to younger readers looking to score points, which is a totally backward way of approaching reading. One of my problems with this series is that it is beyond bloated, but is so full of fluff that (as you pointed out) it is almost immediately forgetable. But what's the incentive for a publisher to spend time honing a book down when they can increase their chances of sales to schools based on the idea of pushing a higher AR score?

I'm not saying that happened here, but to hear that students are trading their AR tests for this book is hardly a recommendation to me. Quite the opposite.