Adele and Simon in America 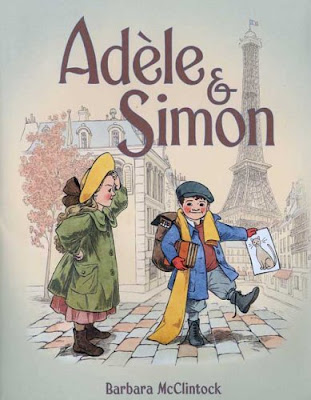 I'm not generally a huge fan of an excellent stand-alone picture book gaining a sequel but I'm going to give this one a pass because I love McClintock's illustrations.

Adele and Simon, those two early 20th century Parisian children, have traveled to America to see the country by train with their aunt. As with their previous outing, Simon is continually losing personal items as he goes, begging the reader to find the missing items among the details in the drawings. Sort of like a Where's Waldo? situation but with much finer art.

McClintock captures a certain nostalgia in her illustrations that recall Windsor McCay's "Little Nemo" cartoons, or a mid-century rendition of turn-of-the-century. The fine lines of her drawings are reminiscent of hand-painted etchings, full of fussy detailing. A true mid-century picture book would have been one or maybe two spot colors, not a full spectrum watercolor, so in that sense they are richer in tone and value. It's what I love, that mix of classic storybook style with modern print quality.

Alas, the story here is a bit clunky as a mechanism for getting Adele and Simon around the various parts of the United States, but it's all an excuse for the pretty pictures and the opportunity for kids to play hide-and-seek with Simon's lost items. If there was a way to do these books without words I think I might be in heaven. Why should David Wiesner corner the market on wordless picture books and get all the awards?

It doesn't have the fresh appeal or the natural simplicity of the original Adele and Simon, but you could do a whole lot worse in picture books these days, and many do.
Posted by david elzey at 3:52 AM