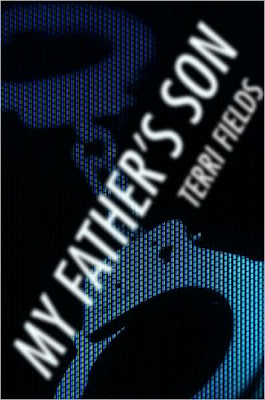 The only thing missing from the front of this book is an exploding gold medallion with the words RIPPED FROM THE HEADLINES! printed in bold red letters.

One day as Kevin Windor is watching TV he sees a news bulletin: The notorious DB25 serial killer has been apprehended. What Kevin sees on the screen, though, is his own father being escorted away by police. It can't be, Kevin says in shock, he knows his dad is innocent!

Already Fields has lost me. Without establishing that Kevin's dad is (or might be) a good father I have to take Kevin's emotional, determined word that his dad isn't the killer. That means that Fields wants me to either take a stance against the main character -- essentially lumping me with all the local citizens who have seen the news reports and leveled guilt on Kevin's dad -- or I have to have faith that Kevin's unwavering and naive support of his father will be justified in the end. In the later case, since I have to correctly guess the end of the story in order to be sympathetic to Kevin, what's the point of reading further? Happy ending, story over.

Constructed like the worst sensationalist television drama, Kevin moves through the accusation and his father's unwillingness to tell the truth (despite the fact that it would support his innocence) like a clueless teen whose knowledge of the law and the real world came exclusively from watching cop shows. Bad ones, with corny stilted dialog. When he goes to confront his father's lawyer Kevin seriously believes that if he could only talk to his dad and hear directly from his that he's innocent that everything will be okay. Then when his dad cuts off communication and says he's going to plead guilty -- to a string of murders, mind you -- Fields has upped the ante in manipulative absurdity.

Unless Kevin's dad truly was guilty of the crimes he's accused of, and the story is an examination of what it feels like to be the child of such notoriety and parental deception, the only reason to have Kevin crusade on his father's behalf is to show how a trial-by-media and guilt-by-association brings out the worst in people, the worst in society. Rather than letting the reader into what Kevin feels it's as if Fields wants to hold up a mirror and accuse the reader of being no better than the people who shun Kevin and his mother.

Now, if Fields were instead using Kevin to serve as a detective to prove his father's guilt (with his father's knowledge and cooperation) we might have had a reasonable mystery story here. There'd still be the son-of-a-serial-killer stigma involved, but it would serve as an adversity for Kevin to battle with emotionally. But that's not the book Fields wrote, and in the worst tea cozy mystery tradition she has dad explain everything to Kevin in the end, a tidy little summary delivered in the best tell-don't-show fashion.

My Father's Son is episode of Jerry Springer turned into an ABC After School Special. It's high concept, lowbrow entertainment. Minus the entertainment.
Posted by david elzey at 4:55 AM

Great review. I'm glad to see someone reviewing even mediocre books--too many people just stick with the good ones. Thanks.

Are you familiar with Julius Lester's When Dad Killed Mom? May be complete irrelevant, but this review made me think of it.

What Lester, and Shusterman in What Daddy Did, focus on is the reality of the crime and it's aftermath - the father figures are guilty, the psychology complex, it's all very gripping.

I thought Fields was dodging by trying to show what it's like for a wrongly-accused father and the aftermath but in doing so robbed the story of it's potential impact. It's natural for a teen narrator to want their parent to be innocent, and for the author to create a sense of doubt in the reader to build tension, but all I felt as a reader was cheated.