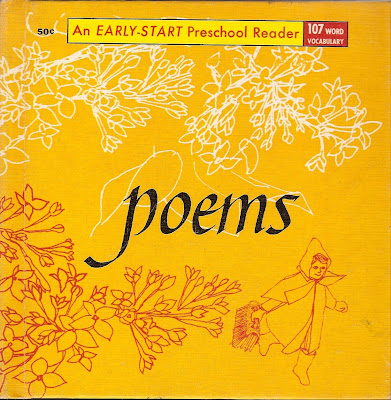 I haven't yet been able to get into Proust, but I can dig where he's coming from. I think we all know too well how easy a little thing can trigger deeply buried remembrances. Having grown up in the post-war capitalist republic that I did, many of my memories are associated with commercial things: Board games and television commercials, music and books.

Many of the books of my childhood did not survive the punishment they took in our household. If I didn't destroy them through a lack of care then they eventually disintegrated in the hands of my younger sibling. As a result, there are countless books I have read but do not remember until chance brings them back into my adult consciousness.

Our local library has a nook just inside the entrance where they hold a year-round sale to benefit the friends of the library. As the library sells off profitable donations and purges its shelves of unread books, the stock of what's available varies almost daily and a frequent scavenger can stumble across some treasures. This week I spotted a small square book that I nearly ignored. It looked too old, too old-fashioned, to hold my interest. But a second glance, and something about the cover design, made me look inside.

In typical 1960's style the book contained line drawings with a single spot color of brown. Flip, flip, and here it was, the image of a child in a rain poncho on cobblestones, and I was back at El Rincon Elementary School. The poem that accompanied the picture, "The Rain" by Robert Louis Stevenson, was more than vaguely familiar. It was as if it had been tattooed along the edges of my reptile brain, the fingers of memory running over the raised edges of those words in darkness. Though not this exact copy, I have held this book in my hands, once, long ago. Whether it was mine or not, I owned this book.

I paid the twenty-five cents for the book and took it home without looking any further inside. Luck, fate, or karma had returned this book to me, another piece of my childhood regained, another fragment of memory restored, another piece of the puzzle that is me put back into place.

A collection of shorter poems based on nature, the book contains two anonymous poems, three by Robert Louis Stevenson, one my Alfred Lord Tennyson, and three by Christina Rossetti. At first I was surprised to see the authors names in a preschool book, then I began to wonder about the unfamiliar name, Rossetti. Was she someone hired by Wonder Books to fill out the slim volume?

We'll have to save an examination of Christina Rossetti for another day, but it turns out she was an English poet who wrote romantic, devotional, and children's poetry. She bears some investigation as it appears she was a proto-feminist who did such things as volunteer at a home for prostitutes while writing children's poems. Fascinating. She also shares my birthday, along with Joan Didion and Walt Disney. Odd company, indeed.

For today I'm featuring the three poems from this crazy sliver of my childhood. Care for a madeleine?

White sheep, white sheep
On a blue hill.
When the wind stops
You stand still.

Who has seen the wind?
Neither you nor I.
But when the trees bough down
their heads,
The wind is passing by.

Boats sail on the rivers,
Ships sail on the seas
But clouds that sail across
the sky
Are prettier far than these.

The Poetry Friday round-up is being hosted today by Yat-Yee Chong.
Posted by david elzey at 4:02 AM

Man, I love that kind of stuff. Book sales are great, thanks.

Wonderful post. I often wonder too, about those "lost" books of childhood.

I'm really enjoying your posts. And thanks for bringing this book to my attention.

(will be linking to your blog :D

Love the serendipity of finding a childhood memory. Thanks for sharing these lovely poems.

Have a great Thanksgiving.