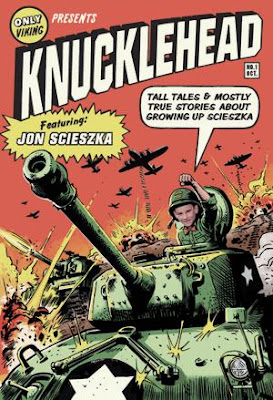 I totally dig that Jon Scieszka had the kind of wigged-out childhood that makes for good kid biographies, but I would hate to see the report some kid would write using this as their source material. Or maybe I wouldn't hate it. Maybe it's what some poor unsuspecting teacher deserves.

In 38 brief and amusing chapters the author of The Stinky Cheese Man and our current National Ambassador of Young People's Literature by the Library of Congress digs up the kind of family dirt that most people try to hide. From pee fights, to fundraising in order to name starving pagan babies in Africa, to threatening to have younger brothers hauled away for misbehaving -- this book is chock-full of all the things that naturally occur in a household of five boys.

This book hardly needs any recommendation. Boys who know the name Scieszka will pick it up and know what to expect. Mostly. If they haven't done similar things recounted in this book they probably thought them. And if they never thought them, then this book will inspire them. Word of mouth will ensure that boys pass this along and read these impossible to forget stories.

Reading, getting boys to read. A steady of diet of this stuff would kill anyone, but boys deserve a treat everyone once in a while. Oh, and for the adult boys out there who might have forgotten what it was like to be 8 or 10 or 12 years old, I'm sure there are a few memories kindled by these accounts.

As for these stories being either tall tales or "mostly true" all I can say is, having once been a boy, a disclaimer like that was probably some editor's idea. I can't imagine any true boy denying any of this as anything but the whole truth.
Posted by david elzey at 4:27 AM

"Maybe it's what some poor unsuspecting teacher deserves."

I think those teachers deserve whatever they get. ;)

I brought this book to my desk when it came into the library, opened it up, and started to read it--but then I decided that no, I'd go ahead and read Almost Alice by Naylor instead, which I realize now was kind of a girly decision. Ah well.