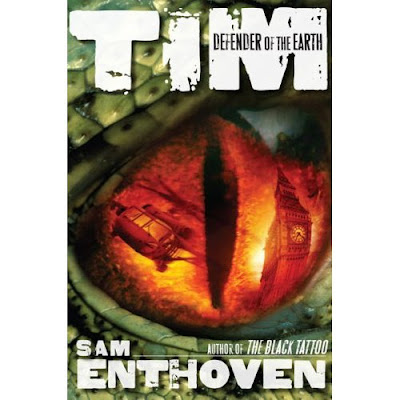 Let's play a game of Mental Picture and see how things go.

First, imagine two giant monsters throwing down like a couple of WWF wrestlers in a large metropolitan city. Sort of like in a Godzilla movie, with both of these monsters a couple hundred feet tall, tossing each other into famous landmarks and obliterating the skyline. One of them is a genetically cloned T-Rex and the other is a mad-scientist- turned-humanoid-cockroach mutant.

Are you still with me?

Okay, so the city is London, not Tokyo, and both creatures are the inadvertent results of secret British government funding. There is no radioactivity involved. T-Rex makes his appearance when the funding for his project evaporates and he escapes down the Thames to the sea where he instinctively seeks the Yoda-like wisdom from a nine million year old Kraken who is the current Defender of Earth.

Have you cried uncle? But wait! When asked by the Kraken if he has a name T-Rex responds with a line pulled straight from Monty Python and the Holy Grail.

Oh yes, and the mad scientist. Well, he was working with nanobots that could deconstruct organic matter at the cellular level, move about as a swarming cloud under mental telepathy, and then recombine it either as it was or modified. When his project is rebuffed by the government he takes it upon himself to take his research to the field, as it were, deconstructing roaches and rats and hapless drunks in the Underground at closing time and recombining them into his own super-self, a god-like being impervious to almost anything that can be thrown at him.

And the scientist has a daughter, Anna. And she's a bit of an outcast. And she hooks up with another outcast, a boy named Chris. And Chris has been chosen to wear a special bracelet that can harness the energy of Earth, energy that can be used by Tim. And...

I'm sorry. Once you get started with a story like this it's hard to know how much is too much. Clearly the author doesn't believe in such restrictions because he tosses everything into the pot. There are times where I would say this is a bad thing because sensory overload eventually kicks in and numbs the brain to the point of boredom, but not here.

This is the book that recently helped solidify my thinking behind the Big Dumb Book. Just as there are Big Dumb Movies that you can enjoy on a purely entertainment level, so are there books that just carry you along, like surfing a wave on absurdity. As a break from all the other required summer reading -- you know, that stuff like broccoli that's supposed to be good for you -- here's a bit funnel cake from the county fair to prevent the brain from calcifying.

Bonus time! Check out this illo to be bound into the hardcovers

Do you know a teen boy who can appreciate literature, Monty Python, and comic books? Bingo, here's their next book.
Posted by david elzey at 8:09 AM