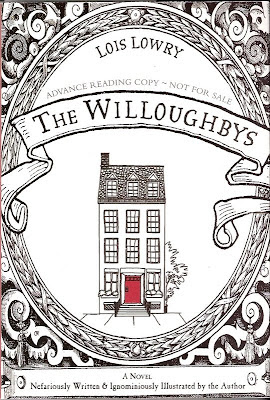 I resisted this initially because I was deep in other reading and couldn't get to it. Then when I had the time to get to it I resisted because, oh, I don't know. Because I was afraid it would suck, and I'd hate to have to say that about a Lois Lowry book?

Fear not, I will not say that The Willoughbys sucks. Neither does it shine.

It does what it sets out to do: it tells of a family of unpleasant children who wish nothing more than to rid themselves of their parents and live as orphans in the world. While fully cognisant of classic books concerning orphans in this world -- Horatio Alger and Dickens tales and the like -- the story is set in another world altogether. It appears to have been hewn from the same fabric as children's books from the mid-20th century. In it's sparse settings, it's descriptions of people, in it's overall vibe it all but shares the same literary lineage as books by Roald Dahl and William Pene Du Bois.

These are no slouch authors, and this is not feint praise, yet there is this lingering feeling that the book resides in a place that isn't so much a shadowy netherworld that parallels our own but a sort of Disneyland facsimile, where the details are perfect but the grit and soul are missing.

The Willoughby children, headfed up by the obnoxious older brother, decide that they would be oh-so-much better of in the world if they were orphans. Realizing that their reprehensible parents don't care much for them, they concoct a plan to send them abroad on a dangerous vacation in the hopes of an untimely demise. Unknown to them, the Willoughby adults have decided it best to vacate their house and, once away, sell off their possessions and leave the children to fend for themselves. Naturally there subplots, chiefly concerning a baby left on the doorstep, a rich-but-heartbroken candy inventor, an immature nanny, and some shenanigans concerning a mother and her son abandoned in Switzerland.

All of this Victoriana plays well into the hands of children who may be yearning for something akin to Snicket's Series of Unfortunate Events. The only problem is... who's reading those books anymore? They appear untouched every time I check the shelves in my local library, and they certainly aren't selling in the stores. It begs the question of a phenomenon rather than a predilection toward this type of story, though Harry Potter did sort of redraw the map for dark adventure. Still, there isn't much call for a book that parodies those classics, so what has to sell here isn't the atmosphere but the humor.

And it's a dry humor, droll, one for only the sharpest crayons in the box. I know of at least one fourth grade class whose teacher read this book aloud to them toward the end of the year. The comments I heard were "It was pretty good," and "A little weird." They didn't know the source material for these ragamuffin tales and heard them strictly as face value modern stories. Was the audience too young? Perhaps, but an older audience would ask for more of this sort of story. A little more gore, a few more perils.

I am reminded suddenly, and for no reason whatsoever as my mind wanders, of Edward Gorey books. There comes a point where a reader suddenly gets what Gorey is doing -- internally, they grok the Edwardian-cum-Poe drawing room farce -- and from that point on the reader has become jaded. Anything similar to, but not, Gorey becomes instantly derivative and weak. So what happened here?

Lowry has given us a paper doll theatre with beautiful decor, costumed characters, even a script, but no motivation or soul. Everything is driven toward the happy ending from the very start, right down to the naming of the abandoned baby, the entirety a mechanical exercise in changing scenery but not in the joy of the story. One could (and someone has) attempt to make a story with the character cards from a game of Clue and do no worse.

I am happy to see Lowry write something not-so-serious for the middle grade set. I only wish, well, that it didn't feel so orphaned as a result.
Posted by david elzey at 8:19 AM

"Lowry has given us a paper doll theatre with beautiful decor, costumed characters, even a script, but no motivation or soul. Everything is driven toward the happy ending from the very start, right down to the naming of the abandoned baby, the entirety a mechanical exercise in changing scenery but not in the joy of the story."

Ah, but I just figured that was because the book was parodying all those other books that ended up the same way. I didn't figure Lowry was trying to do something deep or meaningful with The Willoughbys.

And, for the record, my 8 year old daughter really enjoyed The Willoughbys, and is currently devouring the Series of Unfortunate Events. But then, I freely admit, we're a bit odd around here.

Agreed, but I find that for parody to be fully appreciated the audience should be let in on the joke. It ends up that a lot of adults seem to like it at one level -- the parody, from which it was written -- while the younger set takes it as silly.

Which is fine and all, but Lowry makes direct reference to James and the Giant Peach which may skewer the genre a bit but at it's core retains a darker world. Snicket/Handler manages to blend the dark with the humor better, though I feel he belabors it by a half dozen books or so.

It should be noted that the originals from which these parodies are based came with moral lessons embedded into their stories. While I'm not suggesting the parodies do the same, the lack of an alternative moral is part of what makes them empty. Yes, there can be books that are simply fun reads for the sake of fun, but to me parody and satire should serve another purpose otherwise why make that choice?