I'm the Best Artist In the Ocean 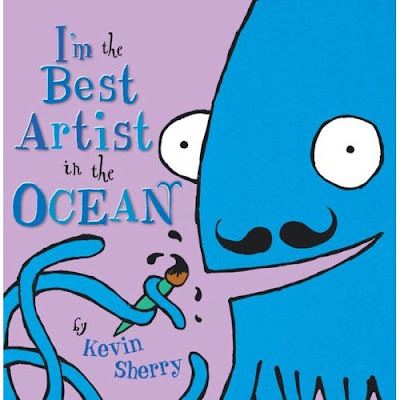 The follow-up to I'm the Biggest Thing in the Ocean turns out to be The Biggest Disappointment of the Year so far.

Giant Squid is back, and being a creature full of ink, he just has to draw. He's pretty goo at drawing all the other fish he sees -- he can draw this, he can draw that -- just as he was boastful of all the fish he used to be bigger than. Leave it to a couple of disgruntled clown fish and a shark to rain on Squid's creative spirit by pointing out that he's making a mess. Then, after a similar thoughtful moment Squid announces that he's making a "Mess-terpiece!" Fold open the the extended spread to reveal that Squid has tagged a whale with oceanic graffiti.

What was great in the previous book was that Squid was a boastful little boy. Like a boy first able to grasp the concepts of language and self, Squid defines himself according to his limited knowledge until he realizes the error of his boast. Then, quite energetically, he embraces that realization and realigns his ego with his environment: he's the biggest thing inside the whale!

But the brag of being the best artist in the ocean doesn't make sense because he's the only artist in the ocean, as far as we can tell. Comparing himself to nothing, the fact of the matter remains in question. Logically one would assume he would find a better artist in nature and then could readjust his claim, but not here. Instead he utters a play on words and leaves us with a very elaborate illustration.

I have to interject here that I went to art school and have more art history in me than I know what to do with. That's me being Squid, but the boast is for a purpose. See, when you read the tiny print at the back of the book you discover that Sherry modeled the endpapers off the work of Miro and the illustration in the whale was influenced by Picasso's Guernica.

The graffiti on the whale is an homage to a cubist's rendition of the horror of the Spanish Civil War? What. The. Hell.

Now, if I hadn't read this note I would have just tripped merrily along, but then I had to go back and look. I don' quite understand how Miro fits into it, but is the Guernica-whale supposed to represent the Squid-artist's depiction of the horror of the oceanic life cycle? I mean, I guess it's cool and all, if you get it (which I didn't on the first pass) but is that really something to casually work into a picture book?

To make a sequel to I'm the Biggest Thing in the Ocean it would have seemed natural to me that Squid have some other illusion of himself exposed, knocked down another peg, or perhaps he could help some other sea life see the error of their ways. Perhaps we could learn something about the oldest thing in the ocean, where we move from old dolphins to old tortoises to crusty Old Mr. Coelacanth.

I guess that's the lesson I never learn. No matter how much I want sequels to favorite books I really should be more careful what I wish for.
Posted by david elzey at 8:22 AM