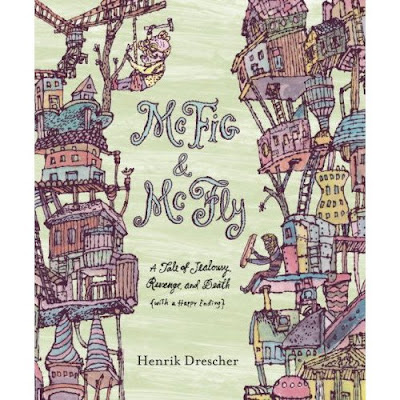 A Tale of Jealousy, Revenge, and Death (with a Happy Ending)
by Henrik Drescher
Candlewick 2008

Blurb: Extremely satisfying in a very old-school sort of way, but what a strange planet it seems to have come from.

McFig, a widower, shows up one day having purchased a plot of land next to another widower named McFly. Both men hit it off instantly, as do their children Anton and Rosie. McFig admires his new neighbor's cottage so much that he decides to build his next door exactly like it. And McFly is more than happy to assist while the children do as neighbor children do, they play contentedly in the background.

The day after the cottage is finished McFly is startled to see McFig building a tower on top of his otherwise identical cottage. Not to be outdone, McFly builds a glass playroom on top of his cottage. Then McFig retaliates, McFly responds, both men building higher and more absurdly until one day McFly falls from the top of his weather vane and dies. McFig, having lost his friend and with nothing to build for, dies from boredom.

All the while and unattended by their fathers Anton and Rosie have grown and fallen in love. They marry after their fathers have died, tear the cottages down to their original structures, and sell off the junk. With the proceeds from their sale they build a connector between their homes to create one large home for all their kids.

And they live happily ever after.

I'm feeling this book he way I felt Brock Cole's Good Enough to Eat. It feels like an older story but I can't for the life of me source it. That the main characters are adults acting like fools, I'm all for that. I think kids get plenty of picture books that are a bit warm and fuzzy, why not give them some lessons in the realities of the adult world?

Naturally younger readers will recognize the one-up behavior, and the blind rage that causes people to behave irrationally, just as it makes perfect sense that the children of these two maniacs are clear-headed enough not to do as their fathers have done. I even like that the two men are widowers -- let's explain that concept to the children while we're at it. I think that may ultimately be what resonates with me, like many old fairy tales where the widowers marry wicked step-mother types or are completely useless without a female influence to keep them on an even keel, these guys are a bit unhinged on their own.

Drescher's art -- back-painted drawings on acetate, like animation cels -- has a jagged, folk-art quality to it, perfectly in keeping with the overall feel of the homes being built. Sort of like Gary Panter meets Howard Finster in the Grimmwald.

I don't get the feeling this is going to end up high on a lot of people's list (i.e. libraries) but if you get a chance check it out for yourself and let me know if I'm as loopy as McFly and McFig.
Posted by david elzey at 8:05 PM