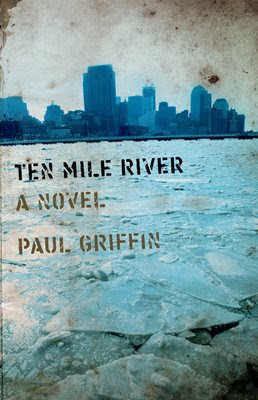 In a sentence: It's Of Mice and Men, only set on Manhattan, and it's dogs and not rabbits, and instead of the big guy being strong and dumb he's strong and smart, only he's book smart and he still takes lip from his scrawny pretty-boy partner because... uh, let me get back to you on that.

The premise does seem to lean heavily on Steinbeck even if that was never the intention. Two underage juvie loners, Jose and Ray, on their own and living off the fat of the land (taking cash for breaking windshields and boosting whatever else they need), living hand-to-mouth until they are 20 which is when Jose thinks is a good time to think about the future, if he should make it that far.

Ray, hefty and insecure, could probably return to a foster home, land himself a good education, and really make something for himself. But he keeps taking orders from Jose who is one dumbass mistake after another and prone to taking off his shirt to show off his abs in front of girls. Ray's bashful longing for a girl at a salon leads both him and Jose toward going straight, but with the opportunity/cliche to do "one last job" and the retire (Jose wants the cash to buy a motorcycle) everything falls apart and the boys are incarcerated and and taken back to square one.

The bond that holds these boys together is elusive. They fell in at juvie a while back and seem to have one of those classic unspoken man-love relationships. Ray plays the housewife at times, insisting on cleaning and being left to cook, and Jose both takes advantage of the situation and gives Ray a hard time for it. The homophobic banter is authentic learned-from-the-inside posturing but there may be something just below the surface to justify it; we are never really given insight into their background to know for certain.

Come what may, it's clear that Jose's living on borrowed time and Ray will turn out okay.

Griffin's debut, though it feels derivative and mines familiar territory, is assured and authentic in its language. Wannabe delinquents will enjoy Ray and Jose's exploits from a safe vantage point though I totally suspect the prime audience for this book are the sheltered, privileged kids who need the occasional dose of reality to remind them that there's another world just outside their comfort zones.

I liked it, I didn't like it... my opinion about the book seemed to go with the breeze. I think once the Steinbeck imagery entered my head it was hard not to go looking for the parallel commentary -- how are Ray and Jose like modern day depression-era drifters George and Lenny, what's the underside of the homeless juvenile off-the-grid workforce look like, that sort of thing. I should let Griffin's book stand on its own but like I said, whether it tried to or not, it brought on the comparisons on its own and once it did it became impossible not the read it the way one would a modern day adaptation of Hamlet. There is tragedy all over this from page one and the question is: will it resonate with a the YA reader it's intended for?

Honestly: dunno.
Posted by david elzey at 5:44 AM