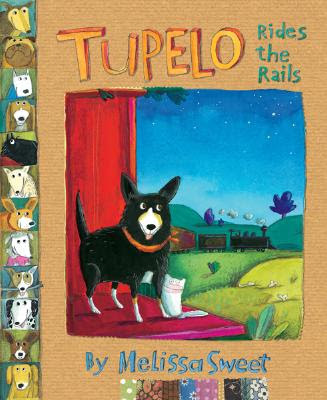 Covers are funny things. You're not supposed to judge a book by its cover, but a lot of time goes into making those covers appealing so that you'll pick them up. Also, after the umpteen-millionth time you decide to ignore your gut feeling and give a book a chance despite its cover, and get burned, you decide that maybe you should trust the gut a little more.

So I passed this book by several times, is what I'm getting at. The cover didn't speak to me. The title didn't speak to me. Nothing about this went "woof! woof!" And generally, I'm not a dog person, and I've been seeing a lot of dog books recently that left a sour taste in my mouth.

Obviously I put the gut in check and picked it up. And then I almost gave it up again. Tupelo is deliberately left by the side of the road with his sock toy, Mr. Bones. What?! Who starts a book off by having a dog dumped by the side of the road... unless its a middle grade novel where the dog will save the family but only at the risk of his on life? That's a heavy message to dump on kids without warning. So many questions; why was Tupelo dumped? Was he a bad dog? Did he live with mean people? Won't kids wonder (and worry) about being left by the side of the road themselves?

Very quickly Tupelo sniffs out hot dogs, and a hobo camp, and a band of dogs who are themselves lost or abandoned. They take Tupelo to a hill where they each bury a bone in honor of Sirius, the dog star, their impromptu god. Then along comes Garbage Pail Tex, a hobo with a bucket of cooked hot dogs for the dogs. Once fed they hop a train to another town where Tex finds the dogs either their old masters or new homes. All find homes but Tupelo who, lacking a bone before, could not make a proper wish for a new home. He decides it is time for him and Mr. Bones to part company, to bury him and make a wish to Sirius. Garbage Pail Tex finds him and together they find Tupelo and new home.

It says something about this book that I was compelled beyond the cover and the introduction to read through. You couldn't have asked me to imagine abandoned dogs, hobos, train-hopping, star gazing, and religious ceremonies for dogs all in one place. Certainly not in a picture book, which I suppose is why this one surprises.

And here we get to that area I harp about with picture books, where editors fear that kids cannot handle sophisticated, demanding stories. I'm thinking "Wow, dog dumped by the side of the road - no one's done that before" and then it hits me in the shower: Hansel and Gretel, taken into the forest and left for dead not once but twice by their parents. These days it's a wonder you don't see libraries being pressured to purge all their Grimm stories that aren't rewritten to have more favorable (in some eyes) endings.

It was worth pushing through my misgivings about this. While it might not be one of my favorite books of the season it's certainly a title worth checking out.
Posted by david elzey at 8:57 AM