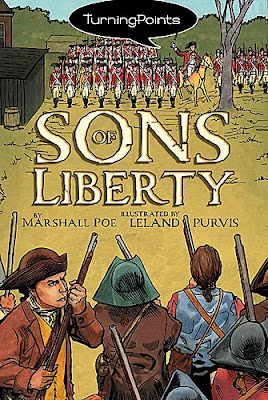 This first title in a new series of graphic novels that focuses on "turning points" in history follows the members of a fictitious Boston family as they endure British rule from 1768 through the signing of the Declaration of Independence. That's the nuts and bolts and as things go the book is about as dry as that description.

This is the down side of the "trend" in graphic novels. "Let's take the most exciting moments in history and show them in a comic book format and that'll make them less dull." Uh, no it doesn't. The idea of having fictitious events "blended" with factual moments sounds like it could be dynamic, but if the interest isn't there going in you have to create that interest.

We start with Nathaniel Smithfield at age ten excited by the rousing words of the patriots, much to his loyalist father's dismay. Okay, so you want to set up the tension between generations, and you want to play with history... you still have to provide both the history and the emotional tug. You can't just assume the reader will know what's going on in Boston in 1768 and you can't portray a ten year old boy like a modern day boy in colonial clothing.

In a visual level this is sort of a mess as well. I missed the initial transition between the "chapters" in Nathaniel's life, from ten year old play-soldier to teenage apprentice to engraver Paul Revere (yawn). It wasn't readily apparent that Nathaniel had aged, he just looked inconsistently drawn. This was followed by a clumsy bit of exposition meant to show how Nathaniel had grown in his beliefs and feed a bit of history at the same time. And is that his dad he's talking to? That wasn't clear either, and on the whole being able to recognize characters (no matter how thinly fleshed out) is crucial in sequential storytelling, particularly if you're going to follow a character as they age.

If you have even the most passing knowledge of American history (uh, we got our independence is all you need to know here) then it's obvious from page one how this ends. The boy will grow, and with him his sympathies toward the the colonialist cause, and in the end dad will be converted by reason to liberty. Yea, liberty. What would rock, what would be new and fresh and make history come to life are all the details from the other side. Let's see it through the blind eyes of the loyalists -- because we know how it turns out in the end, let us see the reaction to those on the losing side, how they lived it and rationalized it If history is written by the winners let the winners be gracious enough to show both sides.

Poe, a professor of history, doesn't give us anything that we haven't already seen before in Forbes' Johnny Tremain, or even Lawson's Ben and Me for that matter. With an eager audience like the one currently built into graphic novels aimed at kids why not shoot for the moon? Instead of a passive-aggressive boy who throws the first rock in a riot, then wonders "did I just do that?" lets see something that might hit a little closer to home: show us how the occupying forces came to overstay their welcome, and how liberty was forged as a result of their oppression, really show it. Show the oppression and the struggle and not merely a couple of brash statements illustrated by the slamming of a hand on a table.

It's hard not to constantly see how history echoes, and to be accused of revisionism in the process, but there are some uncomfortable points in Colonial American history that inform who and what we are as a nation today. Why give us a retread of textbook material in comic form when we can deliver so much more to today's young readers?
Posted by david elzey at 8:21 AM