The Adventures of Sir Gawain the True 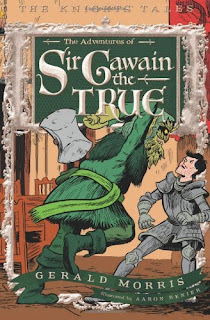 King Arthur's undefeated knight learns some lessons about making (and keeping) promises and the values of courtesy and friendship in the most satisfying book yet in The Knights' Tales series.

Sir Gawain is a great knight, an undefeated champion when it comes to battle. He is also more than a little self-absorbed and quite rude about it. Upon saving a damsel from distress he is more interested in discussing his tricky battle moves than in receiving thanks for his efforts, unwilling to take a kiss or a gift for his efforts, too full of himself even bother asking the lady for her name. Having discharged his duty he doesn't even to think to see if the lady requires a ride home after the ordeal. Returning to Camelot, Arthur is quick to point out his rudeness, as Arthur is keen on having his knights be courteous above all things, and the matter is left as a lesson for the future.

At a Christmas celebration Arthur's court is visited by a strange guest, The Green Knight, who engages Gawain in an unusual contest: the knights will exchange blows, one at a time, until a winner is decided. Gawain is allowed to go first and is instructed by the Green Knight to take his axe and lop off his head. With one blow Gawain lops off the head of the Green Knight's who, to everyones surprise, merely picks up his head and reattaches it to his body. Now it is his turn, but the Green Knight isn't in any hurry. Instead, he gives Gawain a year to live and then, the following New Years, he must report to the Green Knight's castle to receive his killing blow to the neck.

What follows feels at first like a series of random events that turn out to be anything but random. Arthur and his knights set out to find Merlin to find a solution. Surly the Green Knight was some sort of sorcerer and could be defeated without Gawain having to lose his life. Along the way they meet a dwarf, Spinagras, caretaker of the woods, who tells them of a local nobleman, Gologras, who refuses to vow allegiance to Arthur. This, couple with a lot of talk of vows and promises leads to a tournament of battle which itself becomes an exercise in futility for all involved. Finally they learn that Merlin is not to be found and return to Camelot.

Finally a year passes and Gawain makes his way to the Green Knight to honor his vow. Spinagras leads him to a huntsman named Bredbaddle who, it turns out, is married to the damsel he rescued at the beginning of the book. In very short order everything that has happened before, every lesson and friendship and strange circumstance, comes into play proving that it all wasn't just killing time between visits with the Green Knight. Only courtesy and friendship can save Gawain from a beheading from the Green Knight who, it turns out through a trick of sorcery, is someone he has befriended along the way.

This is the third in Morris' The Knights' Tales series and a gem of a middle grade book. Morris's breezy tone is light and occasionally conversational – the subtle breaking of the fourth wall to explain to the reader that descriptions of certain battles have been left out because they are tedious points out, rightly, that most descriptions take longer to relate than to watch and drag down a story. Which might seem counter intuitive to a story about knights who do, indeed, have frequent battles, but Morris is smart and sparing in his choices, and the battles that are described arrive only when relevant to reveal plot and character. They are also humorously absurd, again undercutting the glory of violence while at the same time providing action and lift to the story.

If I had any complaint it's that one book a year (or so) just isn't fast enough. I don't wish to hurry Morris along, because clearly the time and care he is taking with these books is certainly worth it, but if I were a middle grade reader I would want to plow through these one after another, and I could wait maybe nine months between titles, but I want them all now.

And while I know I'm either barking in the wind or preaching to the choir here, Morris manages more in his 120 pages than many middle grade books twice this length. I don't tend to think of myself as having a short attention span – I'm a slow reader, but not a quickly bored reader – but I find that smaller books and smaller chapters are easier to hold in the brain than stories, plots, and characters that become unwieldy beneath the author's cleverness. Yes, detail and depth are impressive, but they can also bulk up a story beyond what is necessary, and especially with middle grade books. I have begun to suspect that some authors view a reader's limited reading time as a precious piece of real estate that they must occupy with as big a book as possible. Good, short books make the reader hungry for more, as I found  with The Adventures of Sir Gawain the True.