I Want My Hat Back 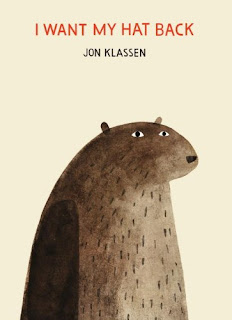 Bear has lost his hat, have you seen it?

They say that in this day of limited attention spans (and I'm talking about adults, not kids) shorter is better when it comes to picture books. I have a theory about this, but let me talk about the book first.

Bear has lost his hat. It is red and pointy. He asks various animals if they have seen it but they have not. Depressed, Bear despairs of ever seeing his beloved hat again until Deer asks him what it looked like. As he describes it both Bear and the astute reader will realize they have seen the hat before, atop the head of Rabbit who, when queried, was suspiciously nervous in his response. Bear retraces his steps back to Rabbit, calls him out as a liar and...

Well, now, this is interesting. We normally see talking animals in picture books as human stand-ins. They talk and we accept it as a fantasy world because in a book anything is possible. What we don't expect when animals behave as humans is to see them revert to their animal ways suddenly. This becomes the twist as Bear is next seen sitting where Rabbit once sat, wearing his hat finally, making the same sort of nervous pronouncements about not knowing where Rabbit went to. In his denial he even goes so far as to spell out what has happened between the page turns: Bear has eaten Rabbit out of anger.

It's funny because it is unexpected and yet totally natural at the same time. Like the punchline to a joke (and it bears a resemblance to the story of the wide-mouthed frog, if you know that one), the expectation is that Bear will find his hat and that there might be some tension in the resolution but certainly the law of nature never seems to come into view because, up to this moment, it hasn't been there at all. Like an unexpurgated fairy tale there are consequences and despite how we humans might resolve such issues in the wild things are handled much differently. Hello, kiddo, the animal world isn't all fluffy and cute!

Now, about those short-attention-span adults (a short rant)...

When an adult enters a book store looking for something for a child – whether their own or as a gift – the last thing they want to do is read. That's been my experience at least. "I'm looking for something for my five year old niece/granddaughter/son, something good and not too long." When it comes to picture books what this tends to mean is that they are looking for something they (the adult) won't tire of on multiple reads but is short enough to not turn a book at bedtime into a lengthy routine. You wouldn't think it would be hard to sell an adult on George and Martha but... "You mean to tell me there are FIVE stories in here?!"

So here's how it used to go. Adult walks in, has a child in mind, a type of book, and preferably something new because the kid is eating up books faster than they can check them out from the library (never mind that the reason they have to check out so many is because they are all so slight of text). These adults expect you to put three to five books in their hand from which they will make a selection within five minutes. Like an impatient child they will flip through the pages and make a judgment about the art first. If the art doesn't appeal, out it goes, the end, pfft! Next comes the story. Most of the time they will flip through the pages and read as if they are skimming for difficult or objectionable words – they can't possibly comprehend what the story is about. If it looks "wordy" after a couple of pages they may, unashamedly, turn as ask "What's this one about." If it cannot be summarized in a sentence of fifteen words or less out it goes. At that point whatever is left, if there is more than one book, simply comes down to a recommendation by the bookseller. If I wanted to push a particular book all I had to say was cute and it was chosen.

This push for shorter books – five years ago 500 words or less was the goal, today it's closer to 300 or less – makes titles like I Want My Hat Back more popular despite their being slight on text. And while it is possible to write shorter books it isn't easy to do well, much less create something that might one day survive as a classic. Personally, I thoroughly enjoyed I Want My Hat Back for the same reasons I liked Kevin Sherry's I'm The Biggest Thing In The Ocean: both books had a simple premise with an unexpected twist ending that made me laugh. And both books will make some (but not all) like-minded kids laugh. But despite landing on the New York Times list of Best Illustrated books for 2011 I hardly see I Want My Hat Back becoming the sort of book that kindles nostalgia or endures to become a classic.
Posted by david elzey at 7:45 AM

Hello. I found you from the comment challenge. Despite my lack of attention, I read this entire post! I totally agree with your analysis of shortened book lengths.