Bigger Than A Bread Box 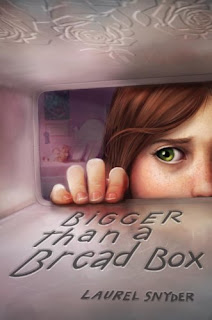 As her parents are going through a separation, a girl finds a magical bread box that can grant her almost any wish she can imagine. But what if what she wants can't fit inside the bread box?

There is no arguing, divorce is rough on families. It's usually rough both before and after for all parties, but especially so during, and no more so than on kids who get caught in the middle. And Rebecca is right there in the thick of it, listening to her parents argue when the power goes out, her mother reaching the breaking point as she berates her father for not paying the electric bill, again. But it's just a fight, right? Or rather, just another fight? But the next day Rebecca comes home from school to find the car packed and her mother waiting to take them from Baltimore to Atlanta where Rebecca's grandmother lives. "For a visit" she's told but Rebecca is furious at being taken away from her father, her friends, her home; more so when she wakes up the next morning and learns she's going to be signed up for school in Atlanta.

Refusing to speak with her mother Rebecca goes exploring and finds her way into the attic. Among all musty old things she finds a bread box, one of three but different that the others. A casual wish for a book to read is answered when she opens a red bread box and there, waiting for her as if by magic, a book to read. Soon, Rebecca discovers that the bread box can grant any practical wish, provided it fits inside the confines of the box. An iPod pre-loaded with her favorite tunes. An endless supply of her favorite snack cakes. A thousand dollars. A thousand dollars! About the only thing the bread box cannot deliver his Rebecca's life back the way it used to be.

But Rebecca has other problems when she is enrolled in school and battles with being the new girl. Buying off friends (courtesy of gifts from the bread box) she finds herself bumping up against the school's queen bee who, it turns out, has family troubles of her own she's hiding. And when she uses the bread box to find a birthday gift for her mother – a collectible spoon – and then later tries to return the spoon out of guilt once she realizes where it came from, Rebecca's story spins in a whole different direction altogether. Just as strangely, it all comes together in the end, although not with the happy ending Rebecca had hoped for.

There is, within the various structures of fiction, the "rule of three" that suggests things happening in groups of three are more satisfying to the reader. In Bigger Than a Bread Box the three main story elements are the divorce and relocation, Rebecca at the new school, and the magical bread box. All three work well together... and yet there's a part of me that wonders if this story could have managed with only two, any two, of them. Because the bread box is key to helping Rebecca learn some "lessons" it should stay, so then the question for me is did this have to be a story about both a divorce and fitting in at school? Looking at it from that perspective I like the divorce story more because there's some real gut-level, kids-on-the-front-lines emotions to be dealt with, while the school story is just, eh, a bit of a distraction from the other two story arcs. This doesn't mean I find the overall story flawed, only that I think I would have preferred there to be two books, The Bread Box Divorce and The Bread Box Goes to School. I know, I know, I need to review it as written.

It used to be that divorce was not a topic of middle grade. Divorce – along with runaways, drug use, and other social misfittery – was once the providence of YA. Oh, sure, you'd get a bounced-around Gilly Hopkins now and then, or the occasional inner city family landscapes of Walter Dean Myers, but for the most part middle grade was the stomping ground of golden tickets and Swedish tomboys and the occasional girl who speaks to wolves. That "issues" stories have shifted toward middle grade is neither  new nor news, and a divorce story like Bigger Than a Bread Box is welcome in a world where readers actively seeking both answers and escape in their own lives. What is new, and refreshing, is the use of a fantastical or science-fictional element within realistic fiction to tell these stories, and in that Bigger Than a Bread Box has much in common with Rebecca Stead's When You Reach Me. For lack of a better description I would put both of these books in the category of middle grade magical realism, something I would like to see more of.

It is said (I've never read a first-hand account) that Jules Verne was upset with H.G. Wells for writing sci-fi that didn't explain the science of the fiction. When you're planet is being invaded by aliens from space and destroying life as we know it, who cares about the science! Some might suggest that this becomes the dividing line between science fiction and fantasy because, after all, if you can't explain it as either the cause or the result of science then clearly it is fantastical. But ultimately I find the arguments over genre slightly tedious and only barely helpful from a marketing perspective. So why bother mentioning it at all?

How the bread box does what it does is never fully explained, and I'm fine with that. Really, it's fine. The bread box is a middle grade McGuffin designed to present a mystery that isn't actually the point of the story. True, it presents complications that have consequences within the narrative arc but it's not a story about a bread box. It's a story about divorce, and a girl named Rebecca trying to navigate that emotional territory, and these are subjects firmly based in a real world that real middle grade kids have to deal with in their lives. To a child afraid of the dark an imaginary friend my become a comfort, to a teen it might be experiencing elaborate fantasies about defeating seven evil exes, and these are coping mechanisms for both the character and the reader to process the emotional terrain of the stories.

All of this to say that I think we might want to consider moving away from classifying middle grade books by genre. I know, I've drifted afield here, but what Bigger Than a Bread Box underscored for me is that I think sometimes we adults look too closely at the wrong things. We're like Rebecca's mother who despite having the weight of her world on her shoulders has simply forgotten to look closer at what her middle grade daughter might need, assuming that our adult decisions and responsibilities are enough. We can't, and shouldn't, presume that any one book will reach out and help a child cope, but sometimes, like a girl in the attic wishing things could be just a little better, a book can provide a moment of grounding and hope. In those moments the hair-splitting of genres and the science of magic hardly matters.
.
.
Full disclosure: While I don't happen to think these things matter here, I received this book from the author via her publisher, and I consider her a friend (though we have yet to meet). Take from that what you will.
Posted by david elzey at 7:30 AM