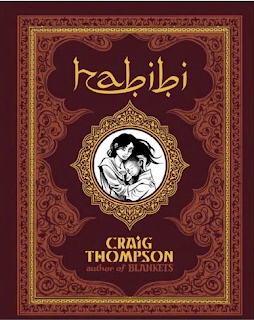 A sprawling, epic graphic novel of love and... no. Just love. But also a lot more.

Chance throws together Dodola and Zam, a pair of child slaves, and theres is an intricate story of love, admiration, and survival. It's a love that survives all the worst things that can happen to lost and forgotten children, and it is a love that seems to span thousands of years at the same time. It is an almost unwieldy story that falters adventurously where most storytellers would probably play safe, and it rewards the reader with something that feels as old-world authentic and modern at the same time.

The story begins when nine-year-old Dodola is sold as a bride to a scribe, a man old enough to be her father. Despite the forced consummation of their marriage he isn't entirely a brute and in short order begins to teach Dodola how to write. Yes, in the beginning was the word, and the word lead to the Qur'an, and to stories. These stories come to calm young Zam, a slave whom she saves and raises like a younger brother. They also save Dodola in the same way they saved Shahrazad when captured into the sultan's harem, they serve as a comfort to her when locked in jail and when she hovers near-death and is being nursed back to health by a grown Zam. Throughout the bonds of love that weave through the stories also wend through Dodola's and Zam's lives as they are separated and long for each other.

It might be easier to explain a book like Habibi if it had a traditional narrative structure but Thompson has chosen to bite of quite a huge chunk of landscape. Arabic stories and the stories of the Qur'an make their way into adventures and parables that could have come from the Arabian Nights tales. Actual religious stories and texts are part of the fabric, as is a fair deal of unashamed carnal humanity, and though it doesn't bother me in context I would be remiss in not mentioning in a review that there's quite a bit of nudity and violence in Habibi. Just like life, which I'm going to assume was part of Thompson's intent.

As a fan of Thompson's tale of first love, Blankets, I was cautious not to read too much about Habibi before I could see it for myself. But I had gleaned that some find issue with his western appropriation of Arabic stories and tropes. I am not learned enough in these areas to gauge those assessments, but I could see where a caution might go up when considering the perpetration of stereotypes and cultural biases. But I have read non-western religious texts, and the Arabian Knights tales, and creation myths enough to know that at the very least Habibi reflects much of what has been written before. Does the current global political situation make us more sensitive to these images and stories? Perhaps, but wouldn't a discussion as opposed to a condemnation be a good thing? 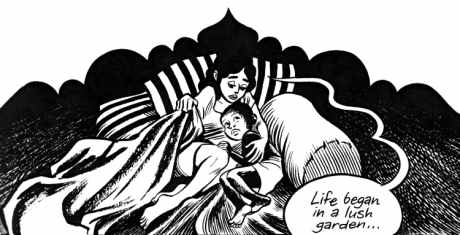 Habibi is strictly for teens, mature ones at that. In addition to the nudity and frank discussion of sex and reproduction the violence includes rape, voluntary castration and torture. There is also, very carefully worked into the story, an historical progression where the story seems to begin several hundred years ago but ends in the modern era. The implication that the more things change the more they stay the same may bother some, suggesting the middle east hasn't changed in a thousand years or so, but as we've seen a reactionary turn to old values cropping up perhaps we shouldn't shoot the messenger here.  Habibi is an accomplished work of art and graphic narrative that at the very least should raise the bar for what can be done with the medium.