The Day the Cow Sneezed 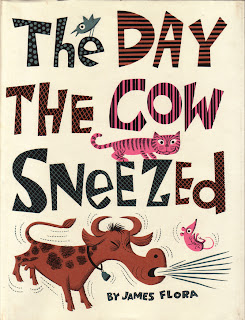 Noted Mid-century Modern illustrator tells a shaggy dog story. Not all illustrators are meant to be seen and heard.

"I bet your cow never sneezed a hole in the schoolhouse wall," begins The Day the Cow Sneezed, and truth be told, the cow in the story didn't either. Through a chain reaction like Rube Goldberg on steroids, the cow's sneeze precipitates a series of events that leads to a number of animals on progressively larger runaway vehicles doing much mayhem to country, town, school, zoo, and carnival rides. And when it was all over, and the world neatly set to right almost as quickly as it had been destroyed, little Fletcher (the boy whose neglect allowed the cow to catch a cold in the first place) is dragged off to the barn by his ear for a little good old-fashioned country discipline by Papa.

But you know what, forget the story. Don't even read it. It's a cumulative story that builds one preposterous whopper on top of another simply to provide Flora a canvas on which to draw this wild anarchy. It's like putting up with a few minutes of boring movie expository in order to get to the explosions. I really don't have a problem sometimes with dropping the whole set-up and starting with the second act in medias res. 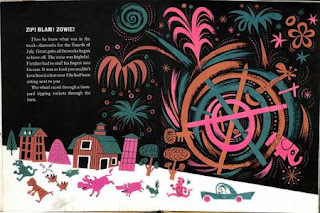 Without the story – whose text is a tad tedious – the story makes a perfect madcap storyboard for a cartoon. It isn't sophisticated, but it isn't really much different from any other children's book in the mid 1950s, and the bold shapes and colors Flora employs show us just how tame most attempts at a retro style really are these days.

His influence at the time is nothing to be, ahem, sneezed at either. As the graphic designer for Columbia Records in the 40s and 50s Flora's work is iconically linked with hundreds of jazz recordings. It's a style you can recognize by sight, one that many hip parents back in the day might have been drawn to without even realizing the connection. 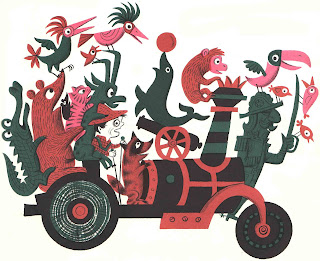 Having said that, it is understandable that the text might fall a little flat. Many great illustrators are able to convey good stories through images without really being able to do the same thing with text. Paul Rand was a genius of graphic design – logos for IBM, ABC, and UPS among others – but no matter how visually modern or stunning, few would call his Little 1 a great children's book. I'm not about to attempt to tar every graphic designer with the same brush and say none of them should write, but there are many, today even, who design and illustrate books they should not be writing themselves. I think sometimes illustrators are giving a pass because they can visually wow an editor that perhaps might intimidate them or make them fear they might lose a good book by suggesting that perhaps they should stick to pictures. It's hard to know for certain, and I admit I may be shooting in the dark here, but I do tend to find that the better picture books come from teams and not individuals.

Now watch, the next dozen books or so I read will completely prove me wrong.