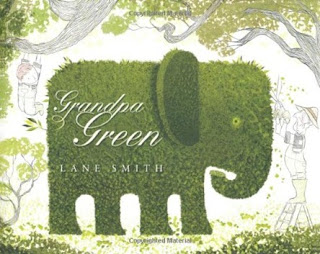 A boy fondly remembers his great-grandfather through the topiary garden he has built over the years.

There's something missing here, something I can't quite put my finger on. Or maybe something off.

We have a boy, ostensibly the main character, going through the garden and explaining the meaning behind all the various animals and objects his great-grandpa has created. We see something unusual in picture books these days, a life-to-death story of a character... but not the boy. No, instead we are told the life story of Grandpa Green who doesn't appear until the very end, when history has caught up with him, and then... he is gone? As the boy models for an elaborate tableau of a knight fighting a dragon there is a sense that we have finally come to the present day, but then there is a final page turn where the boy has taken over and is sculpting an image of his grandpa. I think this is open-ended enough that readers (and their parents who read to them) can decide whether the boy is taking up the family trade or, indeed, is happily clipping a memorial to his late progenitor.

That's not even the missing part for me. What is missing is an arc, I realize. Grandpa Green's life may have a beginning, middle, and end, but are the linear events of a life enough of a story to satisfy as a "story?" Is it enough to say "He lived a full life, and now his great-grandson is taking over?" And even if it is a story about remembrance, about generational bonds, does the story really require a traditional narrative arc, or are the memories enough of a starting point to engender conversation? There's a telling statement toward the end – "He used to remember everything" – suggesting that much of what grandpa created no longer reminds him of the events they portray. It's almost be touching to imagine that grandpa creates the topiary as a replacement for his slowly vanishing memory, but that requires some effort even for an adult to read into it, much less a child.

Lane Smith, whose books I tend to love without reservation, has created a richly-textured study in green. The topiary on the page are just as marvelous as if they had been clipped and shaped from hedges, simply shaped and yet full of dynamic visual tension. There is a whole story in that chicken with a hatchling beneath its tail, and a certain muted sexiness in the scene where grandpa met his future wife at a cafe in Paris. To that end the book begins to take shape in my mind as a picture book for adults. Placed somewhere in mid-life, an adult reader can be taken by the hand as the boy ushers them through a certain nostalgia of their own childhood, their own grandparents' stories of war time and family building. Our narrator refers to himself as a great- grandchild but the book calls him grandpa, squaring up that this is a portrait of an adult parent's own grandfather as seen through the eyes of their own children.

Grandpa Green is a quiet, lovely book, the kind one gives to adults the way one gives Dr. Seuss' Oh The Places You'll Go! to high school and college grads and You're Only Old Once! to adults as a cautionary tale about life post-retirement.
Posted by david elzey at 7:43 AM

My children's great-grandparents (my grandparents) are in their 90s. After years of enjoying pretty decent health they are struggling to adjust to a life that has left them unable to care for themselves as they have in the past.

I want my young children to realize that their great-grandparents are truly special people, people with a lot to share and so much knowledge and wisdom gained from years of living. What my kids see now does not tell the whole story of the person they were and still are. Smith's book gives me the chance to show, in a non-scary way, the progression of a life well-lived. It is exactly the kind of book that can and does reach both children and adults. If not this book, what book would you suggest as a good read to connect young children to their great-grandparents? I personally think Smith's book is this gem and it arrived at the perfect time for my family to enjoy.