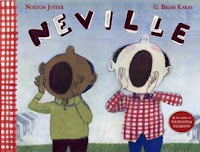 Moving to a new neighborhood is tough. How do you find and make new friends? One boy has an interesting solution...

It's move-in day, and there's little for a boy to do while his parents begin unloading boxes and setting up the house. Mom can see that he's upset, she knows that it's hard to be the new kid in town, and suggests that maybe he should take a walk around the neighborhood. Maybe he'll make some new friends. "Yeah, sure," he says.

At the end of the block he shouts out "NEVILLE!" and is surprised when he's joined by another boy who tells him he's not loud enough. Soon the two boys are joined by a girl who tells them they aren't doing it correctly. Soon, a whole neighborhood of kids is shouting out for Neville and asking who this mystery boy is. As the sun sets and the kids return home they are convinced that this Neville must be a  pretty cool kid, and his friend isn't so bad either. As the boy returns home Neville himself has to admit to admit that his walk around the neighborhood wasn't so bad.

The astute young reader will figure out pretty quickly that the unnamed boy is Neville and that he's accidentally stumbled into a pretty clever way to make new friends. Whether this will ring as true to kids today as it did for me I would be curious to know. Growing up it wasn't uncommon for us kids to wander in the general area of where we knew certain kids lived and just shouted out their names. Goofuses on the roofuses, hollering our heads off so to speak. Phones were for adults, and it always seemed we only ever sort of knew where our friends lived. It also wasn't unusual for parents to roam the streets calling for their kids to come home either. That cacophony of neighborhood life, another victim of better manners and the age of cell phones.

Karas's illustrations are inviting and softly rendered with a very child-like quality to them. At times there are images where the children are drawn small on the page, almost too small; I think at this point in publishing every picture book needs to take best advantage of the page's canvas. I'm not saying a page can't include white space or needs to be crowded and busy but that traditionally printed picture books can hardly make their case against a digital world if they aren't making the most of their real estate.

Simply written and cleanly told, Neville is a pleasant take on the new-kid-in-town story.

I came across your blog through the Comment Challenge. Your reviews are refreshing. A friend of mine is dabbling with writing a children's book with the character's name of Neville. This book sounds fun. I'll be checking back at your reviews.