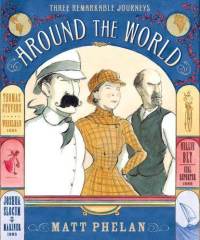 Three remarkable journeys made by a trio of intrepid adventurers – Thomas Stevens, Nellie Bly, and Joshua Slocum – on the eve of the 20th century, rendered in graphic novel format.

As a prologue, we begin with the wager that sets up Jules Verne's Around the World in 80 Days. It seems an impossible (and almost arbitrary) goal to set, but fantastical enough to build an entire narrative around. Obviously Verne chose the time limit based on what was possible back in 1872 but it was enough to fire the imaginations of many a would-be adventurers. With this as a backdrop Phelan proceeds to take us on three journeys whose reasons and purpose were as unique as the people who ventured out.

First up is Thomas Stevens, a Colorado miner who's destiny is changed the moment he first sees a high-wheel bicycle. Sensing that bikes are "the future," and with no desire to spend his life in a mine, he decides to do what no one has ever done before; he intends to circle the globe atop a one of these unusual bikes. He isn't determined to break any records – how could he at something no one has ever done before – but does it almost in the spirit that has driven many to adventure: because it is there to be done. Stevens' journey is a travelogue with only a few minor hitches along the way.

Next up is Nellie Bly, intrepid girl reporter, who previously feigned insanity in order to be admitted to an asylum and report back the abuses she found to her newspaper, The New York World. Her hook is that she's confident she can beat Phileas Fogg's fictional record of 80 days and do the trek in 74 days. Traveling light, Bly's adventures hit occasional bumps along the way including a necessary audience with Jules Verne and the news along the way that another newspaper has sent a female reporter to beat her to the record. In the end she not only succeeds but beats her own goal by making the trip in 72 days.

Finally we come to Joshua Slocum, a retired naval officer looking to sail around the world alone on a 36-foot boat. A quiet man who keeps his intentions to himself, he sets a course east toward the Mediterranean only to discover the threat of pirates which sends his course westward around the world. Along the way he stops to visit the grave marker of his first wife and fellow adventurer who died in Argentina some years earlier. Then come the treacherous waters of the cape, becalmed seas, and a lot of time for Slocum and his thoughts. He returns to port as quietly as when he left and eventually publishes his journal of the trip. Then, almost 15 years later, he returns to the boat and sails away, never to be heard from again.

Phelan notes at the end that while he had intended to illustrate simply the narratives of their adventures he realized there were inward as well as outward journeys taking place. Everyone has their reasons and they aren't always as clear as a simple wager against time. Phelan also admits to having to read between the lines and though I don't fault him for the conjecture there were times I wish he made his interpretations a little more clear.

It is easy to understand why a miner might want to achieve something other than a life underground, but what drove Stevens to such a leap as to see the bicycle as the future, much less believe he had the stamina and determination to undertake a trip around the world? With Bly, perhaps the best documented story of the bunch, it is easier to see that she was an active part of the women's sufferage movement, but what were the personal reasons driving her in all she did? And with Slocum we see what is, perhaps, the most melancholy adventure ever presented as it appears he has undergone the trip because he feels some lasting guilt or remorse over the loss of his first wife. That his second wife "refused" to take this trip with him may be something of a ruse: he offered her passage knowing she would refuse, she refused knowing he was still obsessed with his first wife. But did Slocum say all this in his ship's diary, or is this the result of Phelan's line reading?

In fact, Phelan has forced the reader to read between the lines (or panels in the case of this graphic novel) and ask "Why that choice, why that decision, why that reaction?" Though I hardly would have wanted him to put words in their mouths I think its still possible to let us know how and why these adventurers chose to behave as they did. We're working in pictures here, its just as easy to show us some of this conjecture just as it is to draw a representation of an ocean liner without having to research the exact ship they might have taken, to choose a color and pattern of clothing of the era whether or not they cut and style were 100% accurate. In that, Slocum's story is the closest to showing us what's driving him, but damn, is it depressing.

While I like Phelan's loose gestural stylings, I found large sections of Around the World that looked more like dummy sketches than finished work. I can appreciate the amount of work involved in coming up with hundreds of pages of illustration for a graphic undertaking this size, but with many panels featuring only the subject surrounded by a light color wash there isn't a sense of time or place in the panels, which not only flatten out the images but the story as well. They suggest more than they depict, and with an historical narrative this would be the equivalent of a steampunk story without any of the greasy-geary details that bring the world to life. There is minimalism, and then there's minimalist illustrations that leave me feeling like I would have been better of with just the text. Around the World sits right there on the fence tottering toward a text-only narrative.

On the plus side, the book did leave me hungering and wondering about all the other trips undertaken in order to beat records and prove something. For every attempt there had to be at least one failure. Around the World makes me curious about those who tried and failed, which all things considered, is rather fitting curiosity to be left with.