The Fingertips of Duncan Dorfman 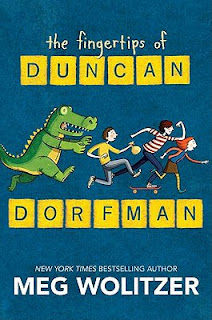 Three kids at a Scrabble tournament realize there are more important things in life than winning. Wait. One of these kids has a superpower?

Life's been tough for Duncan and his mom who have moved back to mom's childhood home in Pennsylvania to regroup at Duncan's Aunt Djuna's house. New kid at school, fish out of water, mom working for a thrift store owned and run by the town eccentric.

Oh, and Duncan can apparently read text by touch. Sounds a little like reading braille but what Duncan can read is ink. Which makes him perfect for cheating at a game like Scrabble where letters have to be picked from a bag, as bully Carl realizes. Yes, a Scrabble-playing bully. Carl and his equally less-than-scrupulous mother connive to get Duncan to be part of Carl's team for the national Youth Scrabble Tournament in Florida, which is where everything will come to a head.

But this apparently isn't enough story. We also need two other parallel narratives; April and her partner Lucy in Oregon and Nate and his partner Maxie from NYC are all down for the adventure and have their own reasons. Lucy comes from a family of jocks who live and breathe sports and don't believe Lucy's Scrabble event is a sport (and they're right, but whose quibbling) and (deep breath) she's also on the hunt for a boy she once met years ago at a pool at some motel, fool-heartedly believing that by teaching him how to play Scrabble he would possibly show up in Florida on this one particular weekend. Nate is the tragic character, the son of a Scrabble tournament loser, who's spent his entire life home schooled and trained for this event, this filial act of redemption. Compared to these twisted narratives Duncan's magic fingers and his hapless milquetoast meanderings hardly stand out.

Ah, but Duncan has a conscious, and is actually a natural Scrabble whiz without his magic touch. He teaches that bully Carl a lesson in humility and (oh, sorry, this might be a spoiler) wins the tournament fair and square. Lucy concedes that her hopes are wild and baseless, and for a while there's a fear that either Nate or Duncan might be the mystery boy in question, but... what? Ho! Look at that! Next door to the Scrabble tourney is a gymnastics championship and, what's this? Mystery boy is a gymnast? Wow, that's almost a sport as well, and so, Lucy finds her boy. Nate, tragedian of the bunch, just wants to be a normal kid and while he loses the competition, he gets the girl. Yup, he asked Maxie along because he sort of harbored a crush on her and her carefree ways, and in losing he not only teaches his dad a lesson but earns his freedom.

While none of these four plots (the three teams plus Duncan's abilities) would stand on its own as a book, combined they stretch credulity to the point of busting a gut in and odd and empty manner. The characters get a cursory depth, perfectly acceptable for a TV sitcom perhaps but lacking any real backstory or shading. And sadly I am coming to the realization that television is defining the depth of the pool when it comes to literature. The idea is that if you throw enough complication and interconnection into the hopper you create a sense of depth that prevents readers (and viewers) from asking questions because they believe they're getting "real" answers (and "deep" characters) in dribs and drabs. When the story is over we have the feeling we have taken the journey of a thousand miles when all we've been doing is circling the block. If the loose ends are tied up who cares that none of our questions were answered? Add a touch of magical realism as a hook, string the plot along by jumping between threads, and we feel sated despite the nutritional void.

No, not every book needs to aspire to literature. Every story doesn't need to be serious, nor does magic need to be explained scientifically to the satisfaction of character and reader, but in the end I feel that if a story is worth telling it should tell the reader something worthwhile. If not telling us something new at least tell us something old in a unique way.


The Fingertips of Duncan Dorfman in less than 25 words. Any kid who writes more than that in a book review is padding his assignment.
Posted by david elzey at 9:22 AM